By now you have surely seen the commercials for the Subway Fritos Chicken Enchilada Melt, and thought to yourself, “Well that looks horrifying,” or “I see Subway has gotten into the drunk food business.” Well rest easy, because for some reason, I decided to try it today and bring you my review

Before I get to the sandwich review, I should tell you that this was probably the most white trash trip to Subway I’ve ever made.

First, I should mention that this Subway was attached to a gas station in the middle of nowhere, and when I pulled in, of the six gas pumps, three were occupied by snowmobiles. Next, of the 15-20 people who came into this Subway/gas station/town hall, at least 90% were wearing one article of camo. Apparently I missed the memo.

And finally, there was this above the garbage. 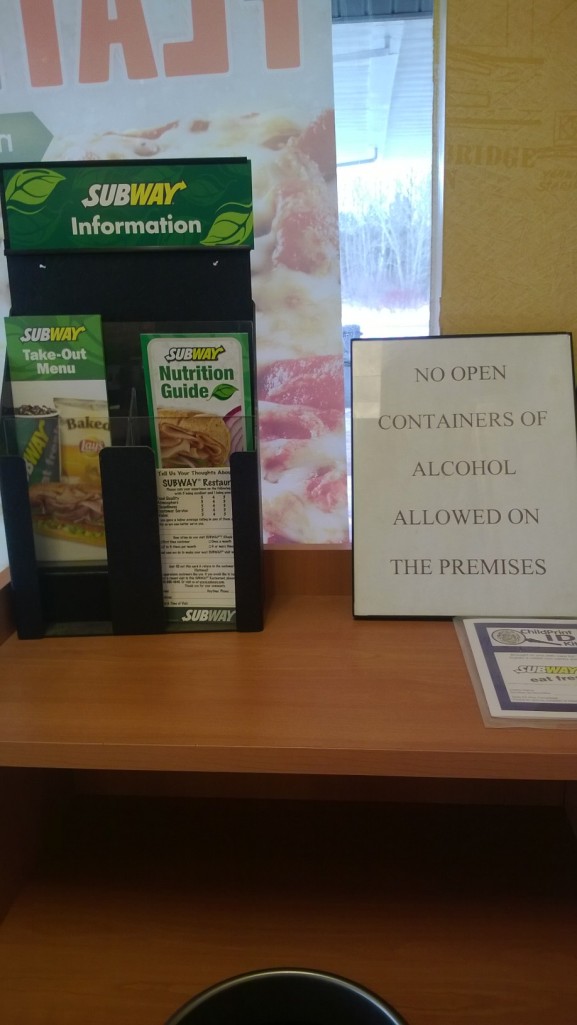 Next it was time to order, and let me tell you there is nothing more hilarious than having to say to another human, “I’d like the Fritos Chicken Enchilada Melt please.” Go ahead, just say it out loud and try not to laugh. Now try saying it to another person.

No less than 10 seconds later, I had to hold back laughter again, this time when the lady making my sandwich opened up the plastic cover and took out the chicken that was to go on this sandwich. The chicken is approximately the color of a Nacho Cheese Dorito, which, is ironic because I ended up getting the Baked Nacho Cheese Doritos to complete the trip to Mexican flavor country. The chicken on this sandwich honestly looked like dog food when she first scraped it out of the paper tray and onto my flat bread. 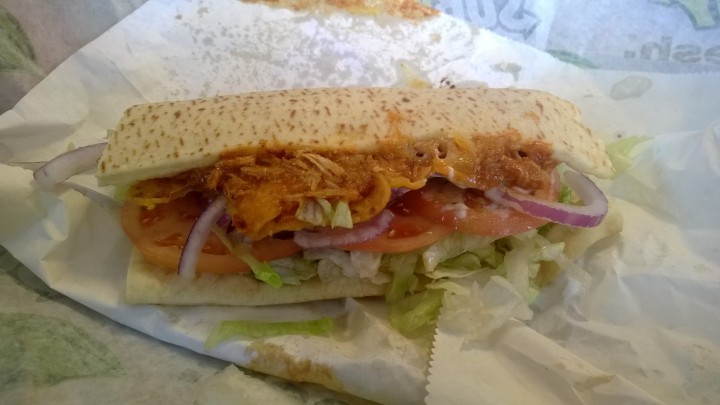 Well that looks…almost like food. To complete the fiesta of Fritos I added lettuce, tomato, onion, and I kid you not asked the lady what she recommended for cheese and sauce, because who am I to argue with a certified sandwich artist. She added Monterrey Cheddar and a bit of ranch, and I was ready to go.

Truthfully, this sandwich was kind of bland, I guess I was expecting more taste from the enchilada flavored/colored chicken. Honestly the best part of the sandwich might have been the Fritos, because it did add a nice crunch, and bit of flavor to the mush chicken, and mush vegetables. I wouldn’t recommend getting more than the 6-inch sandwich.

I’ve had worse things in my life. It didn’t taste that bad, and really the worst part after has been the burps. Holy hell they are some of the worst tasting burps I’ve ever had, like a mixture of Fritos and vomit.

Basically, if you’re looking for Taco Bell-like food, but don’t have a Taco Bell near you, this is the sandwich you’ve been waiting for. Honestly, they could have handed it to me in a Taco Bell wrapper and I wouldn’t have known the difference.