With most hockey leagues around a quarter of the way through their schedule, one of the worst things about hockey is already rearing its ugly head and could impact the playoffs over the final 60ish games.

Of course I am talking about the loser point. The point you get for going to overtime or a shootout and then losing. Single points that when accumulated can lift a team from being well out of a playoff spot into one firmly.

Take a look at the standings at the top of this post. That’s from the NAHL (Tier II junior league) South Division.

You’ll notice I have highlighted the biggest oddity in that group, the Amarillo Bulls, the team I root for in the city I now live in.

To those who don’t follow hockey or are casual fans, they take a look at the standings and see Amarillo at 6-8-6 and think, “boy they’re not terrible, and look at that, only one point back of a playoff spot!” But they have a -19 goal differential, the worst in the division, and have scored the third fewest goals while giving up the most. They are not a good team.

In reality, the Bulls are 6-14 this year, an actual winning percentage of .300, not .450 like the league and team would like you to believe it has. Seriously, it’s a loss, and yet the league’s act like a loss in overtime is still a tie or just doesn’t count towards their overall percentage, that makes no sense.

They have six wins, the fewest in the division, yet they are not in last or even next to last, and are just three points out of second place.

But that 6-8-6 mark doesn’t just inflate a team’s winner percentage, it inflates their false hope of making the playoffs.

And I get why leagues do this, it makes the standings seem closer so teams can tell their fans they are in the playoff hunt, thus driving up attendance and keeping games interesting for a longer stretch of the year.

But look at that, Amarillo currently has six extra points it shouldn’t have if a loss in overtime or the shootout didn’t gift them a free point just because they needed an extra five minutes to lose. No other team in the NAHL (there’s about 10 other teams in three other divisions) has more than two overtime losses.

Quick sidebar, but how do you lose six times in overtime in 20 games? Wouldn’t you at least luck into one or two extra overtime wins in that span?

And lest you think this is just an issue in minor leagues or junior leagues, nope, take a look at the final NHL standings from last year in the Eastern Conference: 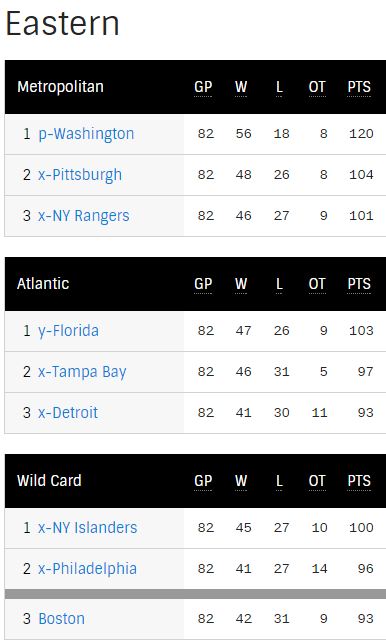 The big thing that stands out is that Boston won more games than Detroit AND Philadelphia, yet didn’t qualify for the playoffs because Philadelphia managed to lose in overtime five more times than Boston did, while Detroit did it two more times. Both Philadelphia and Detroit were 41-41, while Boston was 42-40, yet because they didn’t lose the right way often enough, it killed them and cost them a playoff spot.

What makes it bad is that a regulation win means you win in the standings 2-0 over that team. Yet an overtime or shootout loss, that makes it 2-1 in the standings. You still won, but just because you needed a little extra time to do it the losing team gets rewarded. And somehow a game that needs a little extra time is worth three points, rather than the two when it ends in regulation.

Games should not have an unequal amount of points up for grabs, that’s how you get things like last season’s NHL Playoff standings.

How do you fix this? Well, there’s two obvious solutions that make perfect sense, but leagues won’t do because “parity” and “playoff races.”

The first idea is to switch to a 3-2-1 point system. Three points if you win in regulation, two if you win in overtime or a shootout, and one if you get to extra time. This way you still have your loser point, but also gives teams an incentive to try and win in regulation. Watch the last two minutes of any hockey game in the regular season, they basically skate in circles to make sure they get to OT and get at least a point, then they leave it up to essentially a coin flip and hope they get an extra point.

Or, simply get rid of the loser point and play a 2-0/1-1 system. You win, two points; you lose, none; you tie, each team splits the points. This also gets rid of the shootout, which has run its course. Ending a game in a skills contest is worse than a tie.

But, you can rest easy knowing the NHL or other leagues that follow the NHL’s example will never change these things, because they like to think their fans are idiots who don’t know better.