The Simpsons has been on the air longer than I have been alive, and during that time has featured some of the most influential and iconic members of the music industry.

The legendary Danny Elfman composed the defining score for the opening credits. Michael Jackson, Paul Simon, Paul McCaurtney, Lady Gaga, and Barry White are simply the tip of the iceberg when considering the list of musicians who have had cameo roles on the show. Some performed, some did not.

But many (i.e. me) would argue that the show’s best music didn’t feature any major musical acts at all.

It should be said that although I am never wrong and this list is 100% correct, music is subjective, so feel free to express your own – albeit wrong – opinions in the comments.

#5: We Put the Spring in Springfield

We Put the Spring in Springfield is from the season eight classic Bart After Dark. Through a series of hilarious misunderstandings, Bart finds himself working for the madame of a local a burlesque house named Maison Derrière.

The townspeople mob together to destroy the business of ill repute, but are promptly stopped when Homer leads them in a convincing song that changes their angry tune to a peaceful one.

The song was good enough to win an Emmy Award the following year, proving to be the best of its class in the “Outstanding Music and Lyrics” category. 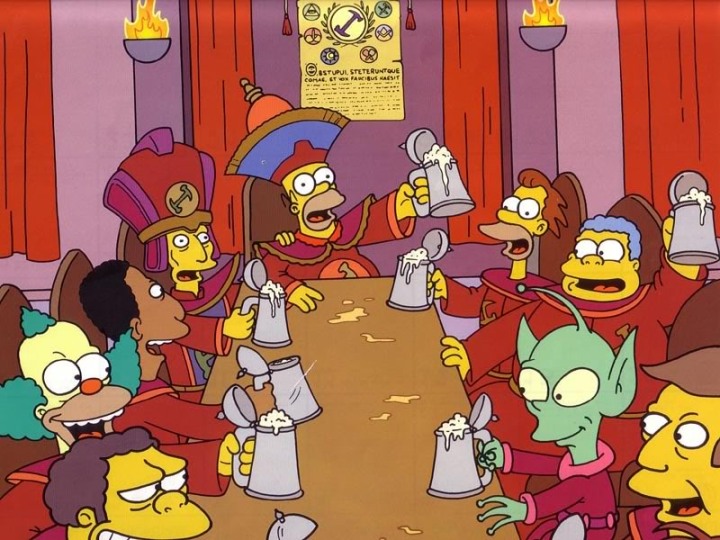 If there were one track from The Simpsons’ discography people will be mad at me for ranking improperly, it’s this one. The song was featured in the episode Homer the Great, in which Homer is ordained the Chosen One for a below the board, Freemason-like secret society. The song describes the nefarious ways in which the Stonecutters subtly control the goings on of our daily lives.

It was also nominated in the Emmy’s “Outstanding Music and Lyrics” category, but lost to something I’m sure was dumb and boring.

#3: Planet of the Apes Musical

Phil Hartman was one of the greatest talents of the 90’s, and before his tragic death in 1998 had multiple recurring characters on The Simpsons. Most notably, Hartman gave voice to the huckster lawyer Lionel Hutz and the shoddy, credit dropping, b-list television actor Troy McClure.

McClure stars in the Planet of the Apes musical the Simpsons attend in the season seven episode A Fish Named Selma. The show is exactly what you think it is. McClure’s character plays a parallel role to Charleton Heston’s protagonist in the 1968 original.

While this bit was not nominated for any awards, it’s widely considered one of the show’s best jokes.

See My Vest is a Weird Al-esque parody of the Beauty and the Beast song Be Our Guest, which is kind of ironic considering the plot of the episode is basically the same plot as another Disney animated classic, 101 Dalmatians.

In the season six episode, titled Two Dozen and One Greyhounds, family greyhound – named Santa’s Little Helper – has a litter of puppies, which the cruel Mr. Burns intends to hide and fashion into a tuxedo.

Harry Shearer, the voice of Burns, channels Cruella DeVille in a top form performance as his character dashes about a walk in closet, trying on an array of increasingly ridiculous clothing based on rhyming animal puns. It’s a symbiotic coalescence of unique and familiar.

You know a town with money is a little like a mule with a spinning wheel. No one knows how he got it, and danged if he knows how to use it. – Lyle Lanley

Conan O’Brien wrote the season four episode Marge vs. The Monorail. In it, the town of Springfield finds itself with a budgetary surplus that they inevitably squander after investing in a poorly built monorail. The plot centers around Marge attempting to stop the slipshod single rail train from bankrupting the town.

We hear the Monorail Song during a town hall meeting. As the citizens debate about what to do with the money, the equally crooked and charming traveling salesman Lyle Lanley wows the townsfolk with an enchanting pitch involving them bankrolling his construction of a monorail for the town.

Phil Hartman steals the show as Lanley. His own musical timing is interlaced with quick interactions with Barney, Grandpa Simpson, Apu, and Chief Wiggum, making the song both toe-tapping and chock full of laughs. It hits on just about every level and culminates with Homer flubbing the final line of the production. The laugh cherry on a fantastic sundae of television music.