You might remember NFL great Terrell Owns for a variety of different reasons, be it his amazing catches, crazy touchdown dances, or outspoken behavior off the field.

Well, T.O. may be making a comeback. In indoor football.

The Duke City Gladiators (Alburquerque, NM) of Champions Indoor Football, are reportedly in the final negotiation stages to bring Owens to the team for the 2017 season.

The team tweeted this earlier today: 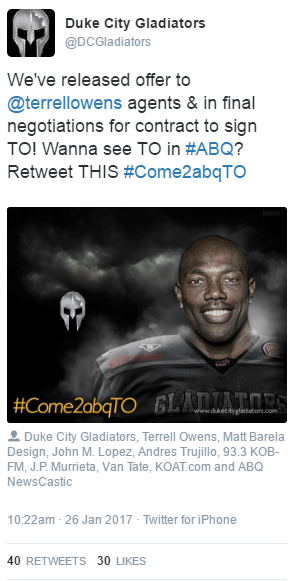 Now, this doesn’t mean it is a for sure thing, but it is interesting to see a team reaching out, and Owens would be the biggest start in the league, by far, and would likely bring a huge boost in attendance not just for Duke City home games, but every road game as well.

The Gladiators play their first game on March 4, so T.O. had better make a decision quick if he wants to get in shape.

If you can believe it, should he sign this would not be his first stint in minor league indoor football/CIF. In 2012 he signed with the Allen Wranglers who were in the Indoor Football League at the time. That time is now in CIF as the Texas Revolution.

Owens actually had pretty good numbers for the team, but it came to a bad end.

On May 29, 2012, Owens was released for showing a lack of effort both on and off the field.

It’s also important to remember that Owens, regardless of how talented he was, is now 43 years old and would be competing against guys 15 to 20 years younger than him. Regardless it would be awesome if it actually happens.

The guy must really want to play football again, because this would not be about money, as CIF players only make about $250 per game, so even a full season would only net him about $3,000. But it would still be insanely fun to see.

What say you fans, would you want to see T.O. suit up for a minor league indoor football team?