I’m still not entirely sure what it is exactly.

Is it a chicken nugget taco with shredded lettuce, tomatoes, special sauce, and thinly grated cheese?

Is it a chicken patty done schnitzel style, then cupped into a semi-circle and stuffed with tex mex fast food toppings?

Is it a mirage? Am I hallucinating? What on earth did I just put in my mouth? 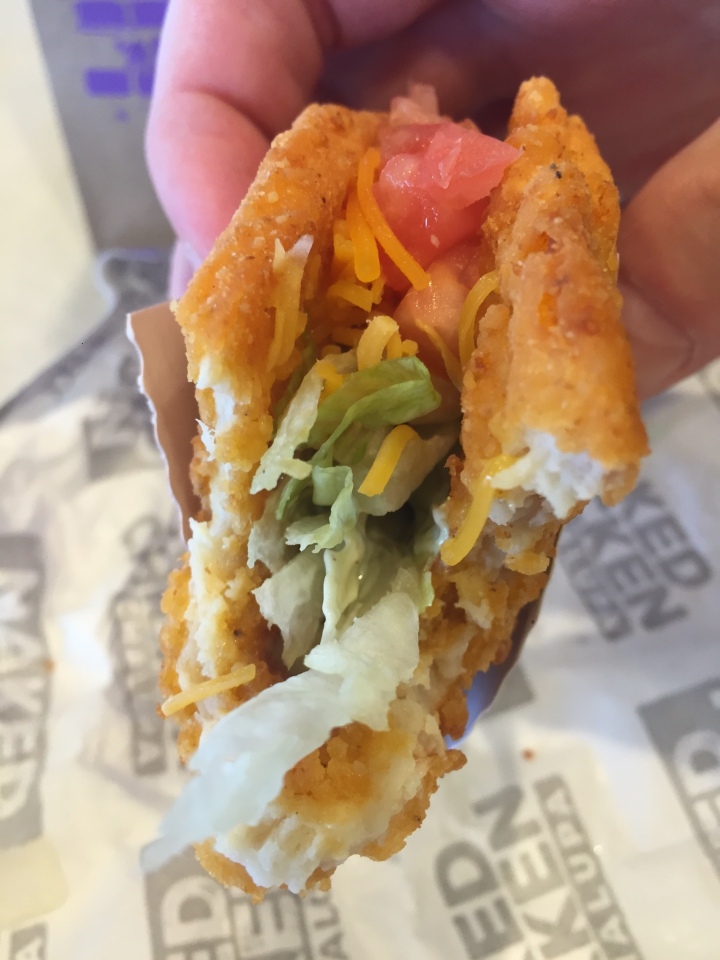 Taco Bell would tell you it’s a Naked (shudders) Chicken Chlupa. It’s poor branding. Let’s keep the concepts of “naked” and “food preparation” far away from one another. They don’t belong together, but then again, nothing about this makes much sense at all.

After I was able to suspend my disbelief about it, I ate the chalupa. I ate every last bite. It doesn’t taste bad at all. The chicken is thin, and the breading is light. It could use a bit more seasoning. I didn’t put hot sauce on it, wanting to get the full flavor as originally designed, and was disappointed I didn’t.

The chicken has the similar flavor and consistency of a fast food chicken nugget, but thinner. The sauce is fine, but there was so little on the chalupa I could get a good taste of it. Other than that, it’s just shredded lettuce and cheddar cheese with tiny cubes of tomato.

It’s not an especially filling item. I was left hungry for more after I finished it. But then again, that may be just because I hadn’t eaten all day before hand. Going at just over four dollars with tax, it’s not exactly affordable. It’s simply an oddity I saw, thought was weird, and figured I’d try to tell people I did. I doubt I’d order it again.

Honestly, the only thing that’s impressive about this Naked Chicken Chalupa is its marketing. Its branding reminded me of Jersey Shore’s white text on black background. An ad on the window front depicted the taco with half of it blurred. They’re really stuck on the whole “naked” concept.

Like I said, I doubt I’ll ever order this again. It’s not cost effective and has little to offer other than gimmicks. Am I telling you not to try it? No, not necessarily. If you like similar crazy things, you’ll like this. But there’s little appeal to it after that.

I give it two and three quarters out of five chicken abomination tacos.