It’s only February 17, but we may have just witnessed the sporting event of the year last night in the Indoor Football League.

The league kicked off its 2017 season in the most bizarre, amazing, and entertaining way you could have possibly imagined.

The fans called the plays, the fans and players stormed the field, and camera crews tried to show a doctor working on an injured player.

And that was just the first half.

The IFL’s newest franchise, the Salt Lake Screaming Eagles, played host to the Nebraska Danger, with the game (and every IFL game) streamed live and free on YouTube. Let’s just say the fans got their money’s worth.

To start, Salt Lake is calling itself the “fan”chise because, well, they don’t have an offensive coordinator, and they allow the fans to vote on what play is called via an app you can download. So last night I sat on my couch in Amarillo, Texas, voting on what plays a minor league indoor football team in Salt Lake City, Utah should call. It was bizarre. 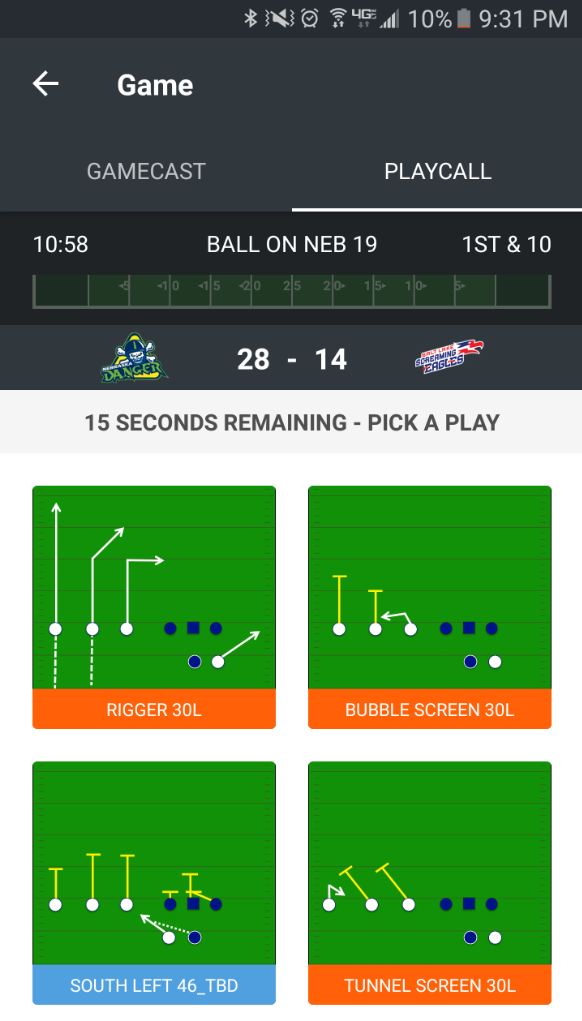 That’s a screen grab of what the process looked like, pretty straight forward and easy. And I have to admit, pretty fun when you see the play break from the line and you realize it’s what you called.

According to the team head coach, he developed an algorithm so that the plays you can vote on are situation appropriate. And when it got to 3rd down you could only vote on Run or Pass, and 4th down it was Run, Pass or Kick. You could even vote on whether to onside kick or kick it deep!

Now, this sound like a ton of fun, and maybe for those of us without anything invested in this or with a rooting interest it was, but it didn’t start well.

The first drive ended with a strip sack in their own end-zone for a touchdown, and on the next series they again failed to get a first down and had a field goal blocked and returned for a touchdown.

I also had more questions about this, that were never really answered. How do you ever run a hurry-up offense? Couldn’t the other team just have their phones on the sideline and see what plays  you’re picking? What happens if nobody votes? Or the app crashes? While a fun, fan-friendly idea, I see a ton of issues that this could have.

The team and the fans hooked up for the first touchdown in team history, and the fans stormed the field. With four minutes and change left in the first quarter. They took selfies with players and cheerleaders, the Salt Lake announcers were on the field interviewing players. There was a penalty called.

Then halftime hit, and in a live broadcast on YouTube without commercial breaks, they needed a way to fill time. So they went into the Salt Lake locker room.

Within seconds all you heard was football coaches screaming every curse word in the book at the players. Then, in an effort spice things up, they spotted an injured player getting looked at on the trainer’s table and walked over to try and get the inside scoop.

They were promptly sent away.

And then, Norm MacDonald entered the announcer’s booth.

Norm is apparently the part-owner of Salt Lake, and he was drunk.

Norm seemed to be having a grand time despite not knowing any of the rules, and being stuck next to an announcer from England who also didn’t seem to know the rules.

Highlights include, “There’s nobody signalling a touchdown” on an obvious touchdown as a ref stood right next to a pile at the goal line with his hands in the air, signaling touchdown.

And to recap it all, Nebraska won 78-47, forcing three turnovers off the fan play-calling, sacking the quarterback three times and holding the Screaming Eagles to 234 yards on 47 plays, or 14 less yards than Nebraska and a real offensive coordinator earned…in 11 fewer plays.

All in all, it was an amazing experience, and one you can relive every week thanks to the IFL making all games free on YouTube.

You can watch the entire game here if you want to see all of this magic for yourself.