The NHL wrapped up its marathon regular season Sunday evening, not with a bang or any real drama but with a whimper.

There were no last-day finishes to sneak into the playoffs or knock someone out, just a couple of games that determined seeding for the Stanley Cup Playoffs, which begin Wednesday.

But as the season’s standings were set in stone, the NHL’s loser point reared its ugly head.

Now, I have harped on the loser point before, earlier this season when the local NAHL team was kept afloat by it, but today it cost two teams a shot at the playoffs, all in the name of “parity.”

Here’s the final wild card playoff spot in the Eastern Conference this year: 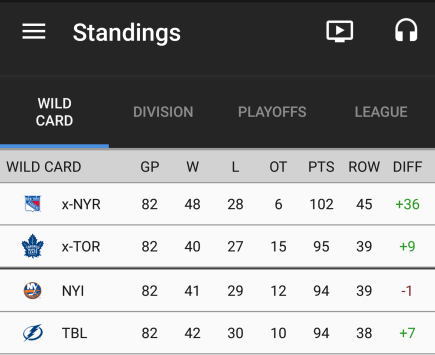 That’s right, the NHL’s third favorite team, after the Blackhawks and Penguins, is back in the playoffs with an exciting young group!

But they shouldn’t be there. They weren’t eighth in wins, or even ninth. They were 10th. But because they lost “the right way” 15 times during the regular season, they were able to stash enough points to beat out two teams who won more games.

The Maple Leafs are not 13 games over .500 like the NHL and Toronto would like you to believe. They were 40-42. The Islanders were 41-41, and the Lightning were 42-40. But because Tampa didn’t lose in overtime enough, they are screwed and get to sit at home while Toronto gets a chance to take down the Capitals.

Again, we all know this, but it’s insanely stupid that teams that win more games are kept out of the playoff race just because some other teams needed a couple more minutes to lose than they did.

In no other sport is this even remotely possible. NFL, MLB, and NBA all just go by record, straight up. You don’t get half a win if you go to overtime or extra innings, if you lose, you lose. But the NHL likes to think its fans are dumb and praises the loser point because it creates shit like this.

Now, thankfully this didn’t happen in the Western Conference, as the Top-8 teams in wins all made the playoffs, but it did take virtually all of the drama out of the playoff race.

Nashville nabbed the last seed in the West, winning one more game than ninth-place Winnipeg…but making the playoffs by seven more points because they had another five overtime losses than the Jets.

I’m not here to advocate for what changes to make, my post I linked to does that. I just wanted to point out that because of the loser point, a two teams who won more games than a playoff team are sitting at home. And that’s a bunch of crap.

If you’re a Lightning or Islanders fan, you have every right to be pissed off that your team will be golfing on Wednesday rather than playing for hockey’s ultimate prize.