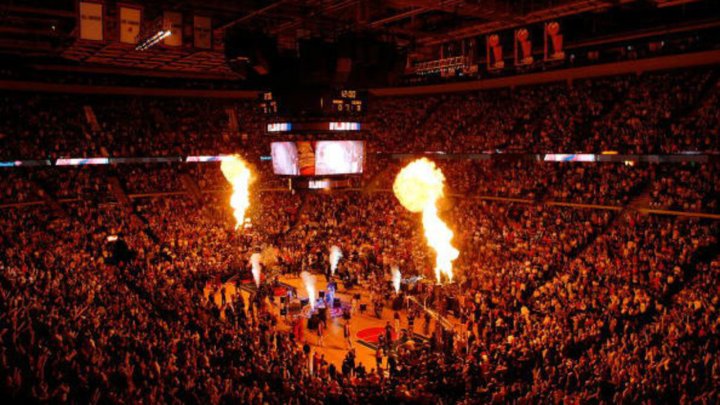 And there she goes.

After 29 years of standing as the Jewel of “Metro”-Detroit, the arena that saw The Bad Boys and the ’04 Phenomenon; The Malice at The Palace; a continuous-string of Warped Tours and Concerts, and most importantly: the Detroit Vipers.

This is an anomaly. Unlike the Joe Louis, which is also closing its doors this year, the Palace is a gorgeous kingdom, built more so for features and aesthetic than maybe for function. That’s not even fair to say. When it comes to the Palace, it was full of upgrades: a gigantic video board, continuous money being dumped into the arena, parking that was on-site and made sense, and easy off-highway accessibility.

So what’s the problem? Location? Things to do in the area?

For a 29-going-on-sub 10-arena to have to sit vacant (or be torn down) just because of a flashy, new, necessary HOCKEY arena being built in downtown Detroit, is a clear-and-direct result of this fascination of, once again, feature over form.

Hockey/Basketball arenas are a mess. I don’t care what anybody says. Having to work scheduling, and constantly tear-down ice, put up hardwood, remove/add seats, and all the extraneous work that goes into rebuilding the arena on a nightly basis…that’s a mess.

The Pistons kinda suck. The Red Wings are (sans this year) a playoff team and a quality team in hockey (reread previous parentheses). This is a nice public relations stunt from the Detroit Pistons to show “hey, we’re a Detroit team too! Look, we’re in Detroit!”

The Palace deserved better than this. Little Caesars Arena deserved a chance to be a Hockey Arena, like it was meant to be, for at least a year.

You can’t have quality ice where a basketball will be dribbling the night before. You can’t bring new life to a dead team by moving (*cough cough* San Diego Chargers *cough*). You can’t justify demolishing a palace because a new castle is built.

For shame, Pistons. You’re abandoning a city that welcomed you with arms wide open, and leaving them with a vacant-reminder of some of Michigan’s finest professional basketball memories.

Bring back those Vipers.