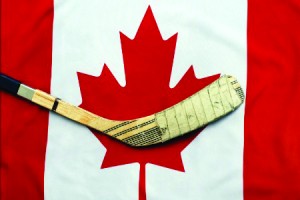 We are through one night of the NHL Playoffs, and right from first puck drop, what were we treated to?

Grandeur displays of pride for a country’s pastime.

Montreal, Ottawa and Edmonton all had phenomenal celebrations of appreciation and excitement for the greatest game on Earth.

So what? Everyone knows Canada loves hockey. That’s…kind of the joke.

Why does it matter that we see their appreciation for the sport?

I’ll tell you exactly why.

The better part of the United States could not care less about hockey. In fact, while watching the games all night last night, my roommates made sure to let me know that there is little excitement in hockey, and “why are you watching the whole game? Nobody cares until the third period anyway”.

However, this is the NHL’s true chance to show the true excitement that comes from the game, and especially when you open your international broadcast schedule with cities that live-and-die hockey.

I thought the town of Ottawa was going to burn down in a 0-0 game in the middle of the second period. There was nonstop tension. Edmonton? Forget about it. Rogers Place in Edmonton, AB was one of the loudest rink environments I’ve heard in a LONG time. Every single time that there was even a slight check, the whole lower bowl would stand up in their plastered orange jerseys.

Montreal? I don’t need to say anything about the most historic arena in hockey. It speaks for itself.

Don’t allow me to discredit a SINGLE minute of action I saw in the States last night. XCel Energy Center might have been the loudest rink, tied with Rogers Place. I mean, an overtime playoff hockey game in Minnesota? Shut down the state. Now, granted, Minnesota is a Canadian Province for all I care.

Having five Canadian teams play in the NHL Playoffs this year is exactly what hockey needed. As far as the number of teams in the NHL in Canada, this is pretty equal representation for the league.

Raw, undying, United States-vs-Canada action at a time when the NHL can really cash in is huge for the sport right now. I’m not saying that this playoff round will change mass public’s view of the sport, or will convince everybody to watch the sport, but anyone who tunes in and really watches an opening ceremony or a game…I promise will not be disappointed.

I’ll see you tonight at 7, hockey.

One thought on “Why Canadian Teams in the NHL Playoffs is good for American Hockey, eh?”