Burger King has long been the biggest innovator of the Big Three fast food brands (the other two being McDonald’s and Wendy’s) so it’s not surprise that once again, BK is trying something different to get people through the door.

New items on the menu at BK include the Steakhouse King sandwich, a derivative of the Bacon King, the Crispy Chicken Sandwich and perhaps most notably, the Fruit Loops Shake.

Usually, BK is more outlandish with its new or limited-time menu items (remember the Whopperito, anyone?) so a more conservative approach is surprising here.

The major attraction to the Steakhouse King is the 1/2 pound of beef and special, steakhouse-style fried onions on top and it certainly doesn’t lack for that. It’s a rather large sandwich to hold in your hands.

The Steakhouse King eschews the sauce normally found on its cousin the Big King in favor of steak sauce and mayonnaise, though in this particular sandwich I had, both were rather lacking. I cursed myself for not having bought a drink, and ended up buying an iced coffee.

Once you get a few bites in, you quickly realize that it’s like most other BK burgers, just  a bit bigger and with more gooey cheese. The onion does provide a nice crunch, but the bacon just feels a bit excessive in an already ridiculously rich burger. The fact can’t be repeated enough; you will have a hard time finishing the sandwich, because damn it, it’s just so rich. So, so ridiculously rich.

I found that I actually enjoyed this sandwich rather a lot better after placing it in the fridge for about an hour or so; the flavors congealed nicely and the sauces really took over and did their jobs.

Overall: 6/10. Not unpleasant, but I really expected more.

A profile view of the new Crispy Chicken Sandwich. Look at that buttery glaze on top of the bun. Amazing. 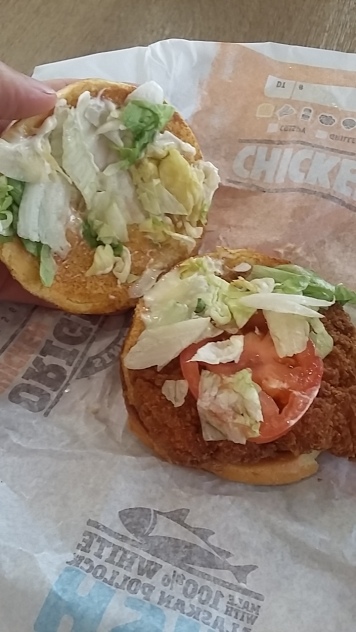 An open-face view of the Crispy Chicken Sandwich. Like I said, simple and relatively easy.

I honestly did not expect a lot from this sandwich, which has been much ballyhooed via BK’s TV commercial that features the dude that claims the value-style chicken sandwich tastes like peanut butter when microwaved, which is…. odd.

But I have to say I was pleasantly surprised.

The sandwich itself was extremely simple in execution: a buttered, brioche bun with crispy, fried chicken, lettuce, a slice of tomato and a heap of mayonnaise. Its simplicity is what ultimately hits the mark in terms of satisfaction.

The buttery bun is especially noteworthy, as it accentuates the saltiness in the crispy chicken and balances nicely with the mayonnaise and tomato’s texture. The chicken itself was really nice and tender, even if there wasn’t really any seasoning to it. It doesn’t detract form the overall experience, which is excellent.

Overall: 8/10. An excellent and surprisingly cheap option for a sandwich that you’ll surely want more of when you’re finished.

This was the main attraction for me. I am all about those sweet, sweet desserts. Especially if presented in a whimsical fashion. The release promised Fruit Loops cereal and a special “sweet sauce” with a blend of vanilla ice cream and a dallop of whipped cream. When I first heard this was going to be a thing, I made sure to be the first in line for it.

Except, the shake machine was broke. So, I had to go back the next day. Thankfully, I was still the first one to order it in that particular store. (We’re all about making history at HOT SPROTS.)

The manager at the store said the taste was described to her by a co-worker as “like how the milk tastes when you’re finished with your cereal.” That descriptor actually isn’t that far off; it has a distinct “leftovers” feeling to it that isn’t all that unpleasant. My big fear was that the “fruit” part of the shake would overwhelm that rest of it, when in actuality, the vanilla ice cream features prominently.

I don’t know if they put in the required amount or if they put in too much, but my particular shake was very Fruit Loop laden. Almost excessively so. Every sip of the straw was approximately 65 percent Fruit loop chunk and it made for quite the surprise. Normally, one doesn’t eat or chew through a milkshake. Fruit Loops, when they get wet, have this tendency to get soggy and mushy and that’s what happens here, to almost amusing effect. (I was still getting Fruit Loops out of my gums a half-hour after drinking the shake.)

I think if you approach it with a spoon, it achieves the desired effect.

Overall: 7/10. It’s alright, especially if you like Fruit Loops, but I can’t help but to feel it’s presented in the wrong fashion. If you don’t like texture with your milkshake, you probably won’t like this.