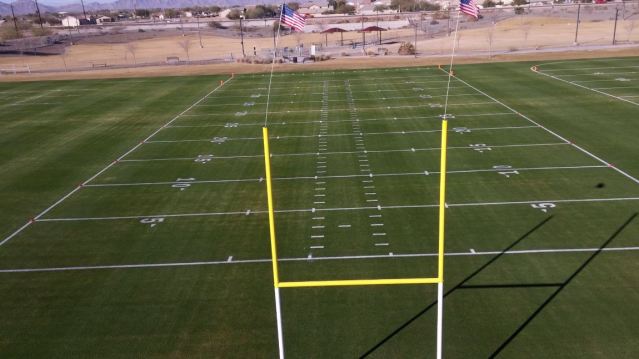 As if there aren’t enough minor league football leagues out there to fail, both indoor and outdoor, someone has decided they want to make a professional flag football league.

The proposed league is the American Flag Football League, and hopes to have eight teams and start in 2018. It is being started by financier Jeff Lewis who saw his son playing flag football and thought, “BOY! There’s something people would pay to see! Football with no hitting!”

According to ABC/ESPN, the games would be 7-on-7, and played on a regular 100-yard field.

There will reportedly be a test game next month on June 27 to show potential investors what the game has to offer, and will feature quarterback Michael Vick and well as running back Justin Forsett.

The game won’t be shown live, but will apparently be live-streamed later that day.

Lewis says the league aims to sign players who are retired from the NFL and want to keep playing, as well as guys out of college who may not have gotten a shot at the NFL. No word on how much they plan to pay the players who do play in this league, if it ever happens.

From that article above:

The test next month also will include significant innovation to the sport. The league’s flags, which are patent pending, are attached via magnets instead of the typical Velcro. When a flag is detached, a sensor detects it and an official will be able to see the exact point on the field when the flag came off, thus ceding the guesswork to science.

So yeah, they’re really going all out on these fancy flags, because as someone who officiated flag football in college, I can tell you that it is mostly guesswork trying to figure out exactly where a player’s flag came off.

I’ll be completely honest in my early assessment of this: It’s a terrible idea.

There are already four legit indoor leagues, a handful of other less legit ones, a couple of outdoor leagues, and a veteran spring league for players hoping to get back into the NFL, and every single one of them has teams that struggle to get fans and are always in flux from year to year. I see this being no different from that.

This might be a neat idea for a year or two, but I honestly see no long-term viability for this. It’s basically like watching practice football. Say what you want, regardless of the type of athletes this league might get, but deep down people want to see someone hit someone else when they go to a football game, not pull a flag off another player.

It seems like a football version of the recently formed 3-on-3 basketball league that just formed featuring retired NBA players. Sure it might be fun for a game or two to see some old stars play, but after that it becomes a novelty and truthfully, kind of sad to watch as guys past their prime play and attempt to get a taste of past glory.

What say you readers? Is the American Flag Football League a good idea, and would you watch it either in person or on TV?