After our rundown of the best fake minor league baseball team ever, the team posted a contest on the Facebook page saying there was a roster spot open for anyone who could answer a trivia question!

Here was the question, which was actually pretty difficult considering there were some famous pitchers to come through Amarillo when they were part of the Yankees and Orioles farm systems. 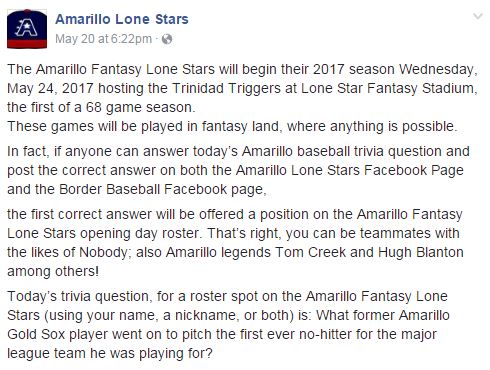 Well, by Sunday morning nobody had answered the question yet, because apparently the olds don’t know how to use Baseball Reference. So I decided, that since we will be covering the team this season from made-up start to made-up finish, why not be on the team and answer the question?

And so I did, with the correct answer of Bo Belinsky, who tossed his no-hitter as a member of the California Angels against the Baltimore Orioles.

And just like that, HOTSPROTSTAKES.com and Ronnie “The Snake Charmer” Balasko is the backup first baseman for the fantasy Amarillo Lone Stars this season! Since baseball legend “Who” is the starter at 1B, we’ll be limited to pinch-hitting duties, or perhaps step in if injuries happen, but yeah, we are on the team!

The 68-game season starts Wednesday, and we’ll be around for every game giving you as much info as we can both on how the team, and our player do over the course of the year.