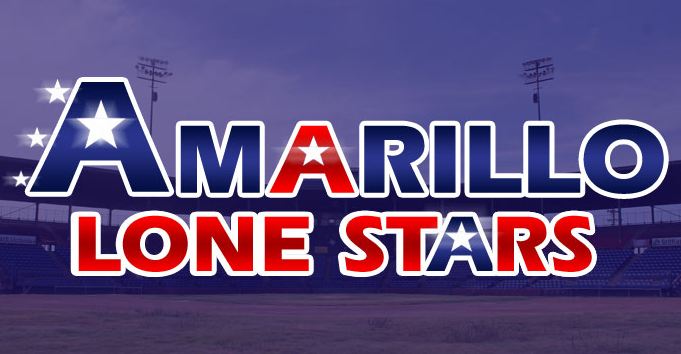 Apologies for missing Saturday’s game, but it was posted rather late in the evening and we aren’t exactly waiting around on Saturday night for the daily Amarillo Lone Stars update, so you are getting two games today.

Behind a 13-strikeout performance from Jim Bouton (he pitched in Amarillo back in the day), the Amarillo Lone Stars topped the host Triggers 10-4 to complete a 4-game sweep in the season-opening series.

Bouton did his work in just six innings, giving up just one run on one hit, while walking two.

The Lone Stars (4-0) got all the offense they needed in the top of the first when the Triggers (0-4) committed two errors to aid four Amarillo hits on the way to a five-run first inning. The Triggers countered with one in the bottom of the first to make it 5-1 before Bouton settled in.

Kenny The Kid (some Amarillo player) cracked a two-run home run in the fourth to make it 7-1. The lead swelled to as much as 9-1 in the seventh with two more Amarillo runs, before the Triggers scored three over the eighth and ninth innings for the final margin.

As always, here is the screengrab from Saturday night to prove we didn’t make this up: 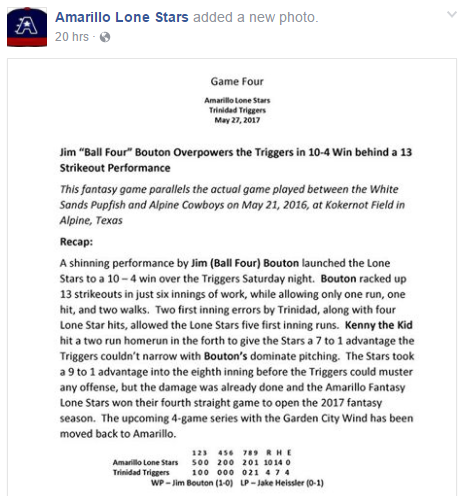 The win moved Amarillo to 4-0 on the year and send them packing for a return to Amarillo for a four-game series against the Garden City (KS) Wind.

Three pitchers combined to hold visiting Garden City to six hits as the Lone Stars picked up their first shutout of the season to move to 5-0.

Offensively, the Lone Stars were paced by I Don’t Know (that’s a player, don’t ask) who collected two doubles and 3 RBIs, while Nobody (another player) racked up three hits and scored a pair of runs.

Amarillo scored the only runs it needed in the bottom of the third when they tallied twice, then added single runs in the fifth, sixth, and eighth innings for the final margin.

Here is the screengrab to again prove this game actually happened on the Lone Stars Facebook page. 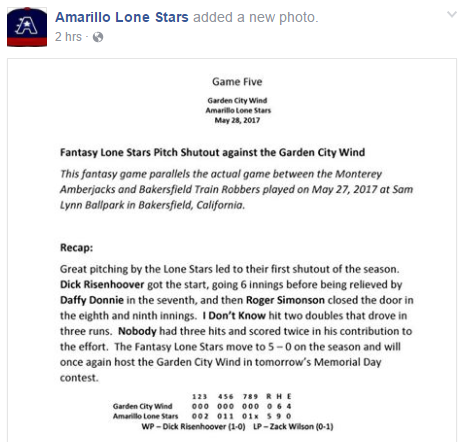 The win moved Amarillo to 5-0 on the year and they will again host Garden City tomorrow on Memorial Day.