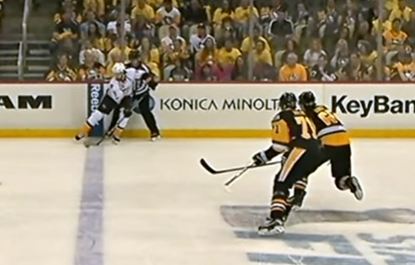 When the NHL allowed coaches to challenge plays where the referee might have missed goaltender interference or a player might have been off-sides, it seemed like a good idea at the time.

After all, you want to make sure you get calls correct, especially if it’s a majorly blown or missed call and might affect the outcome of a game with serious implications.

Since adding the coach’s challenges for the start of the 2015-16 season, it has not gone the way fans, players, or even coaches have thought it would.

It went from a well-meaning idea that, again, would miss the big gaffes and correct obvious mistakes, to going over razor-thin plays with a magnifying glass, looking for some sort of evidence that the play in question should either be reverse or stand as called on the ice. Even when they do all that, they don’t fully explain how they reached their decision, often leaving us watching at home or in the arena wondering how they could possibly overturn the call, or how on earth the let it stand.

Last night in Game 1 of the Stanley Cup Final between the Pittsburgh Penguins and the Nashville Predators, the visiting Predators appeared to score the game’s first goal after dominating the opening minutes of play. They made what appeared to be a clean entry, forechecked hard, even forcing a Pittsburgh turnover, and set up P.K. Subban for a wonderful wrist-shot goal.

And then Pittsburgh challenged.

And the goal came off the board, and with it went all of Nashville’s momentum they had built up. 10 minutes of game time later, the Penguins led 3-0 heading to the first intermission.

Everyone, with the exception of Penguins fans who were thrilled by the call, was livid at the call, that, despite not having indisputable evidence that they call should be overturned, that it was overturned and took a goal off the board.

The problem isn’t so much the call, (if you want my honest opinion, I think the back skate was up off the ice, technically making him off-sides) it’s that coaches are challenging any sort of close play at the blue line like this, because why the hell not, it might work and you saved your team a goal.

It’s very similar to what happened in MLB when they allowed coaches to challenge plays. Guys would slide safely into a base, then as they popped up from the slight might unintentionally take their hand/foot/body off the bag and the player who applied the tag, keeps applying it and gets a cheap out despite the runner clearly being safe.

Again, this is not an egregious error where a guy slides past the bag by two feet and is tagged out, or that the Nashville player was off-sides by a foot and a ref two feet away missed it. It’s a play that at real-time speed, minus super slow-motion replay, everyone would agree is legal and that the goal should have counted.

The other factor in all this is that the NHL and fans constantly complains about goal scoring being down…and then they put in a rule like this that literally takes goals away, when again, at real speed nobody would ever know that the guy’s skate might have been half an inch off the ice. That’s crap.

Even worse and more confusing than the off-sides challenges are the coach’s challenges for goalie interference, which seem like a skit on Whose Line is it Anyway, where the rules are made up and past precedent doesn’t matter.

Check out this clip from a game earlier this postseason:

The first thing you’ll notice is that even the studio people, who have spent their whole lives covering or playing hockey, have no idea what constitutes goalie interference and even admit as much.

If people who spend every waking hour around the game don’t know how the hell a rule should be called, then how are fans supposed to know?

Again, like the off-sides play, it just feels like a random call and varies based on which referee is in charge that night. If there is ever a crowd in front of your net and the puck goes in, there is no sense in not challenging the play just in case.

Throw in that these reviews are slow, boring, and provide little answer after reaching a conclusion, and it absolutely takes a ton away from the game. Hockey is the fastest game on the planet…and then all of a sudden the game stops for five minutes while the refs look at a 7-inch screen on a tablet to try to decide what might be a critical moment in the game.

To be completely honest, I’m not sure how you improve on either. Yes, technically a player might be off-sides when his skate is half and inch in the air, but that’s not what the rule and purpose of challenges was when it was put it, but that’s what it feels like it has become. And the same goes for the interference challenges.

One argument I heard that makes sense, at least on off-sides, if the opposing team gains control of the puck, it negates your ability to challenge the play. Look at the clip of Pittsburgh and Nashville again, go to the 17 second mark. Pittsburgh clearly has the puck and a chance to get it out of their zone, they fail and the puck goes in. That’s not an off-sides call’s fault, that’s the players being unable to get a puck out of the zone. And they were bailed out on a lousy technicality.

Or say, if the play goes 10 seconds past the initial incident, then you can’t challenge, again, if you can’t make a play in that time, then it was not the off-sides that led to the goal.

It made sense when they put this rule in place, to try to help rectify big mistakes and stop cherry-pickers from goal-hanging. Instead, roughly once a night the league turns into a game of synchronized line crossing like soccer and its off-sides.

That’s not fun to watch, and it’s definitely not good for the NHL.