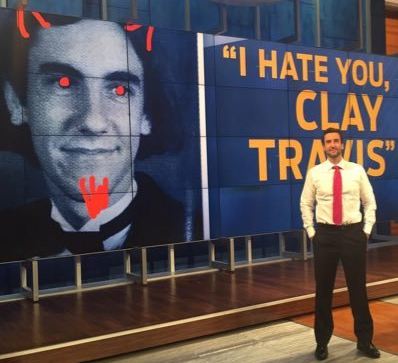 This will be an ongoing series where we track the bets of noted sports idiot Clay Travis, just to show you how wrong he is and how much money you would lose by taking his betting advice.

If there’s one place to never take betting advice from, it is sports pundits. They, for the most part, only have surface knowledge of the sport they are offering said advice on, and are often betting with their heart rather than their head.

We at HOTSPROTSTAKES.com got the idea to track noted buffoon Clay Travis’ bets after he was all-in on the Predators winning Game 5 in Pittsburgh. Spoiler, they did not win that game.

So, let’s get caught up from that point and see where ol’ Clay is after a few more bets.

We’ll be basing these based on his picks on Twitter, and on the standard assumption that he is wagering $100 per game.

Well, he decided to test his luck the next night on the NBA, thinking the Warriors would sweep and taking them on the road.

Not even close. The Warriors got killed, and he is now at -$200 since we’ve been tracking him.

I’m on Warriors -9 tonight. Series is ending in five games like I told y’all a month ago. #shootersshoot#dbap

Anyway, here in chart form is Clay Travis after the three bets we’ve been tracking him:

This has been Tracking Clay Travis. Check back as we track how much money he loses over the course of the year.