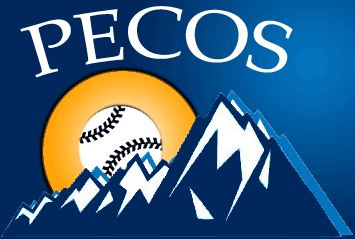 For those of you who have been following along with our coverage of the Amarillo Lone Stars, you know that they were set to play in the Pecos League this season before the City of Amarillo denied them use of the stadium in town.

It was a bummer to all the baseball fans in the area, and those just hoping to have something to do on a Friday night.

Well this past weekend on a trip to Sante Fe and northern New Mexico, my girlfriend and I took in an actual Pecos League game, and it was the most sad, amazing, and entertaining thing this side of minor league indoor football.

Our game for the night we were in attendance featured the first-place Santa Fe Fuego playing host to the last-place White Sands Pupfish. And in low-level independent baseball, the difference between first and last place is like watching the University of Alabama play some poor HBCU who is only there for a check.

Now, the Pecos League is pro baseball, but barely. The players make roughly $50 per week, so if they’re in this league, they’re really hanging on for dear life to those hopes of playing professional baseball.

Other than that, there is little that would tell you this is pro baseball, and not some men’s league.

The field, both in terms of player facilities and playing surfaces was barely passable for a high school team. The dugouts were just benches with a tin roof over them like you see at a little league field. The infield had more bumps and crazy bounces than any field I’ve ever seen, leaving pitchers and fielders holding their breath on any ball put in play.

The stadium, Fort Marcy Ballpark, was actually insanely cool. A historic field with a very cool old seating setup that allowed you to bring your own lawn chairs in, even for seats behind home plate, and featured scenic views of the mountains beyond left field. 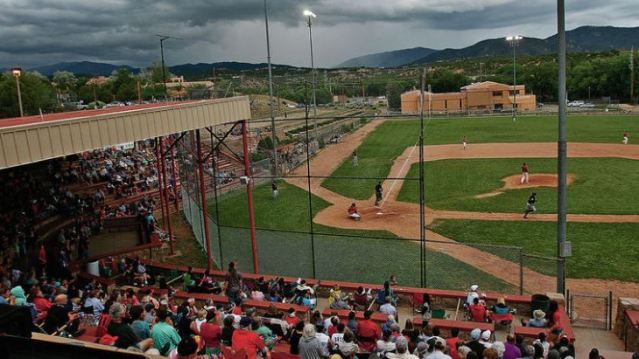 Please note, that picture is not from the game we went to, my phone died, so I don’t have pictures of the actual crowd that night, which might have been 200 or so people, not the 2,000 or so you see here.

But the biggest issue with the field was its dimensions. The sign in left field said 345, which, OK, even if it really isn’t and is closer to say 325, that’s still a decent poke for low-level indy ball. But center field said 355. And right field didn’t have a sign at all, but could not have been more than 300 feet, at the absolute most.

But first, the game had to start. And that wasn’t exactly easy, because one of the two umpires scheduled to work the game didn’t show up. So we waited for roughly an hour before the ump that actually was there went out to his car, put on his gear to work behind home plate, and started the game with one umpire having to make the calls at all four bases.

So naturally we went and gout our picture taken with Pepper.

And then the game started and it was exactly what you expect on a field that would be small for a high school team playing at 7,000 feet elevation.

There were dingers. And runs. And lots of them. This is the box score from that game, which we did stay for the entire game.

The Fuego scored in every inning, and hit six home runs as a team, while the Pupfish hit two.

The star of the game was Fuego first baseman David Stone, who entered the 17th game of the year with one home run and nine RBIs on the year. Needless to say, he had a good night.

Stone went 5 for 6, cracking four home runs and racking up a whopping 13 RBIs in the win. The biggest win for him was that after every home run by the Fuego, the fans in attendance literally pass a hat around and collect money for the player who hit the home run. Figure at a game with 200 people there was roughly $50 collected for every home run, and Stone walked away with around $200, or, a month’s salary in the Pecos League.

This is not to say that David Stone is some guy who fell through the cracks. At least two of those home runs were to right field and were probably outs in a normal park, and the pitching that White Sands trotted out was…not great. But still, that’s the game of a lifetime.

Needless to say we left after the fifth inning with the score 20-4, after sitting there for approximately two-and-a-half hours, only one-and-a-half of which was actual baseball.

The cost of this entertainment: $6 per ticket.

So yeah, if you’re looking for a cheap way to spend a night watching baseball and want to see lots of dingers, the Pecos League is for you.