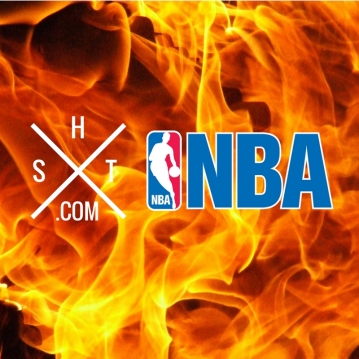 When the Golden State Warriors added Kevin Durant to an already record-setting team, most people lamented the fact that they had made the regular season, and then the playoffs, useless.

After all, despite some growing pains with Durant they romped to the best record in the NBA this season, and then steamrolled through the playoffs, going 16-1 and being tested less than five times over the course of those 17 games.

So for on-court action, yeah, you could argue that the Warriors ruined the NBA. TV ratings for local games were down, the playoffs seemed meaningless outside of Golden State and Cleveland games, and everybody was just overall upset that the whole season seemed pre-determined the second Durant headed to Oakland.

But one thing Durant heading to the Warriors has done is made the NBA off-season bonkers with activity and rumors, as team try to figure out a way to try and catch the Warriors.

The biggest bomb (so far) of the off-season dropped today when Adrian Wojnarowski broke the news that the LA Clippers were trading Chris Paul to the Houston Rockets.

Now, the argument over how much better Paul makes the Rockets, and how he’ll co-exist with James Harden, is for another time, but the biggest thing is that team aren’t sitting still in their pursuit of taking down Golden State.

The Clippers-Rockets trade probably doesn’t get the Rockets at the same level as the Warriors, but it’s another superstar piece to that team, and the only way you might have a chance at beating the Warriors is to assemble as much talent as possible.

And that’s what’s made the Durant signing so great for people who love to follow rumors. All 29 teams have realized they have no chance of beating Golden State with their current roster, so teams are doing all they can to try to assemble a super team of their own. Chris Paul to the Rockets is probably just the first domino to fall this off-season.

There’s still tons of rumor and speculation surrounding Paul George, and if he’ll go to Cleveland, or Boston, or straight to the LA Lakers for more money and a chance to try to recruit other stars there next season.

And there’s the Gordon Hayward drama, does he stay in Utah and keep the core of a young, exciting Jazz team together, or does he jump to Boston and try to help the East’s No. 1 seed get better?

People will argue back and forth about the right way to run a sports league, salary cap vs. no salary cap. Hard cap vs. loose cap. A salary cap creates parity, but it’s forced, because nobody can outspend anyone and the only way to assemble a great team is to draft well and keep that core together as long as possible. As a result, way more teams have a chance at winning the title, like in the NHL, but there are no truly dominant or must-see teams.

But the NBA, with its loose cap and the massive rise in the cap last off-season, has allowed teams to both build a juggernaut, or to try to build one.

For one season, yes, the Warriors may have ruined the actual basketball being played, but give them credit, and thanks, for making other teams go crazy in their pursuit of trying to find a way to knock them off their pedestal.