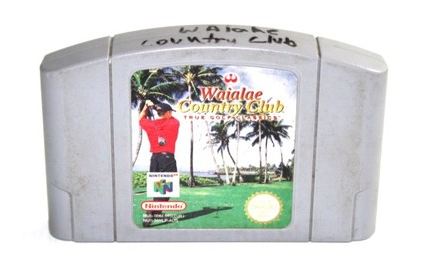 So my internet has been terrible all week, and while I wait for it to get fixed next week, I’ve taken the chance to replay some of the old Nintendo 64 games I’ve saved from my youth.

With the The Open Championship going on in the real golf world, I decided to fire up the first golf game to ever grace the N64, Waialae County Club: True Golf Classics. Mainly because a “friend” of mine stole my copy of Mario Golf long ago, and a copy of that game on N64 is just as much as a game on the current consoles.

The game takes you to scenic Hawaii and, as you probably have guessed, Waialae Country Club.

The game, for coming out in 1998 has a decent amount of game modes, including Waialae Open (tournament), a one-round tournment mode, stroke play, skins games, match-play, and practice.

There’s just one problem, emphasis on one: There’s only one damn course on the entire game, the previously mentioned Waialae Country Club.

It doesn’t matter how many game modes you have, how great the graphics are (more on that later), or how great the gameplay (again, more later) is, if you only get to play one course over and over again. And a course that most people had never heard of prior to this game. It would be like buying a game called Baseball Classics…and you only get to play as the Yankees and Red Sox.

Now, let’s get on to the actual game. Here’s a video clip of the game in action.

As you can see, the graphics, even for a game that came out in 1998, two years after the N64 launched, are not great. The golfers, and actual course look OK, but the second you go into any detail, like trees, they turn into 2D things that look like they were ripped from a game on SEGA.

The next part of the game that goes with graphics, sound, isn’t much to write home about. The sounds of the ball meeting the club are fine, as is the sound when the ball hits the bottom of the cup. There are two commentators who kind of chime in when you hit good or bad shots, but they are mostly forgettable and only available in the Tournament modes. One bright spot in the sound department is the crowd, who make pretty good noises for a 1998 game, getting loud a birdies and good shots, while politely applauding at your par saves.

Onto the gameplay, which as you have seen in the video above is the classic 3-click swing system. A Button to start, A Button to stop the power meter, and then another A Button to try to stop the swing on the red line at the bottom. It works pretty well, and runs smooth, so you can’t blame a glitch or lag for your mishits.

But there’s one major issue I have with the swing meter: It seems completely random. You’ll time a swing perfectly, stop at the red box up top, stop in the red area at the bottom…and the shot will still go 10-20 yards short of what it says the club can do, or sometimes 10-20 yards long. And if you’re off even the tiniest bit on stopping at the bottom, you are going to lose yards. I constantly found myself having to go up one or two clubs on all shots from the fairway, because 90 percent of the time the club they gave me wasn’t enough, even if its projected distance was greater than the distance of the shot.

Putting is a little easier and seems to work better for gauging power, it’s a simple two-click system, you see a grid on the green and determine where to aim, at the top is a graphic that shows if the putt is up or downhill, and once you start your swing, you just hit the A Button once more to stop it and the putt is on its way.

Honestly, it’s not a bad game from a gameplay standpoint. Sure the graphics aren’t the best, but graphics alone do not make the game. It has plenty of game modes to keep you entertained, but it all comes back to the fact that there’s one course on the game. If this game had say six courses instead of one, this might have been a game that we talk about more favorably, instead, all I think when I start is up is, “well let’s see how I do this time around.” 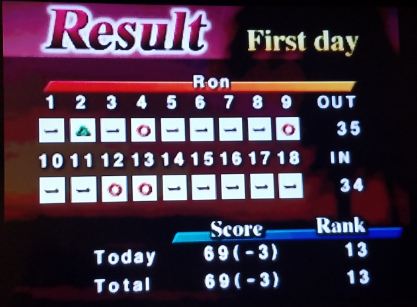