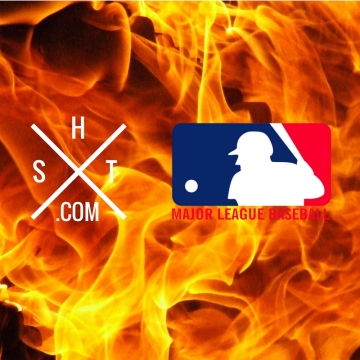 Adrian Beltre joined the elite 3,000 hits club today when he hit a double to left field in the bottom of the 4th inning. Play was suspended as his teammates and family rushed the field and several celebratory banners were displayed at Globe Life Park. This hit represents a momentous milestone in Adrian Beltre’s career and a joyous occasion for baseball fans everywhere. Or at least that’s what they want you to think.

As of the writing of this blog there have been approximately 3,899 home runs in the MLB this season, a pace that would break the single-season record by more than 500 home runs.

If performance enhancing drugs are truly a past time in our nation’s past time, what possible explanation could there be for the boom in home runs? I’ve been trying to get to the bottom of this issue for several hours and after watching a few innings of baseball and doing a couple of searches on Fangraphs, the only possible explanation is that pitching is getting worse.

The adage goes that good pitching will typically beat good hitting, and if hitters are winning the battles more than ever, that speaks great volumes about the quality of pitching in the MLB.

Of course, you’re probably wondering what this has to do with Adrian Beltre? Unfortunately, this pitching epidemic isn’t a new development. Since his Major League debut in 1998, Adrian Beltre has a career batting average of .286, meaning that pitchers are only getting him out over 70% of the time which is unacceptable. Adrian is the fourth player to join the 3,000 hits club this decade (Derek Jeter, Alex Rodriguez, and Ichiro Suzuki) and unless the MLB wants another member, they need to solve the pitching epidemic.

One final reason to address the pitching epidemic sooner rather than later is the pace of games. Fans have been complaining about games that are increasingly exceeding 3 hours in length and despite the rules put in place by the MLB to address the problem, games haven’t been getting any shorter. Aside from shortening baseball games to less than 9 innings (an actual stance that I support but will get to some other time) the best way speed up games would be for pitchers to record more outs and allow fewer base runners.

So now that we’ve identified the pitching epidemic, how do we solve it? I think the obvious answer is that pitchers aren’t getting enough reps. It’s no coincidence that the decline in pitching has coincided with shorter outings and reduced pitch counts for starting pitchers. Managers have gotten trigger happy and pull their starters at the first sign of trouble instead of sticking to their guns and letting their players play. How are pitchers supposed to improve and gain the confidence to overcome adversity if their managers won’t give the real-world in-game experience?

This also explains the rise in pitching injuries.

Pitchers aren’t throwing enough so they can’t get stretched out and perfect their technique. This stiffness and inexperience is leaving players ripe for injury and forcing them to get Tommy John surgery. If you don’t believe me, look no further than Cy Young. His managers never worried about pitch count and according to a book I read about him in the 5th grade, he once pitched an entire double-header.

This grit and determination is why Cy Young is the greatest pitcher of all-time with the most all-time wins and the award named after him. And on top of all of that he hardly ever got injured and never had Tommy John surgery. Maybe if more managers and pitchers read that book we wouldn’t be in the place we are now.

So go ahead and celebrate Adrian Beltre all you want. Just keep in mind that he’s a symptom of a disease that’s ruining baseball, not the cure.

P.S. And don’t you dare complain that I didn’t talk about Adrian Beltre enough in the blog post about him getting 3,000 hits not everything is about him sorry he isn’t the most important player in baseball I care more about the team than the me. Maybe he wouldn’t get ejected from games for disrespecting the umpires if the media didn’t stroke his ego so much.