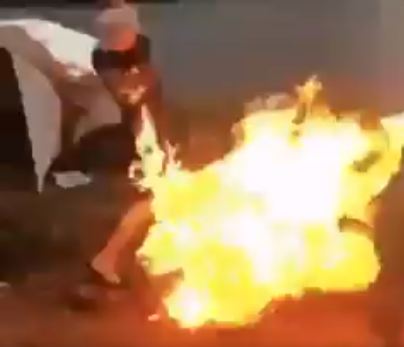 A given rule for any sport, and really life in general, is that if you add fire to the mix it instantly becomes 10 times more exciting.

Well today the Darwin Awards Twitter account posted a video of a man who decided hit was going to play Fire Golf, as in, hit a ball or log, or something that is on fire with a golf club.

Let’s go to the video and see how it went:

He’s a little bit heavy on the back leg, but he has good temp on the backswing and gets to the parallel position before giving a mighty downswing that makes great contact with the fire. Now, the problems start with the follow-through, he bails out to the left, which probably means he blocked his shot out to the right.

But in fairness, his clothes were on fire at this point.

He then shows off his speed and makes a great dash for the lake to douse the flames. Great awareness there, he didn’t even try to bat the flames out with his hands, just goes straight to the water.