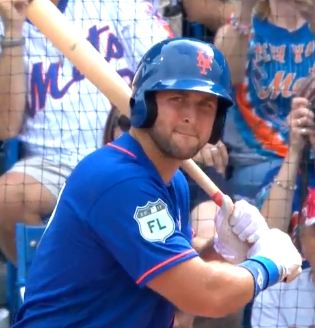 Remember when Tim Tebow was undeservedly promoted to High-A ball and the Florida State League, this despite hitting at a .220/.311/.336 clip, which would get a normal person cut or benched, but not him because he’s a sideshow who brings in fans?

Well, it may stun you, but after a hot start with the St. Lucie Mets, one that had people claiming he was a real prospect now, he’s hitting worse than ever, and his numbers in High-A are now worse than his terrible numbers in Low-A with the Columbia Fireflies were.

That article linked to up above was penned on July 26, roughly one month into his High-A stint and a time when he was hitting a blistering .315, getting on base at a clip of .400, and slugging at an impressive .522 for a .922 OPS., including four home runs, already more than he hit in 64 games with Columbia.

Well since July 26, the bottom has fallen out of the Tebow hitting parade.

And for anyone who follows baseball, this is not a surprise. He couldn’t hit in any of his showcases, aside from when pitcher’s grooved him pitches so he could show off his power, and didn’t hit at all in Low-A ball against players often 10 years younger than him.

Now, I don’t think Tebow is a .112 hitter. He’s exactly what his numbers have been over 117 minor league games: a guy who hits about .220 with almost no power, no base-stealing ability, and no defense to even justify having him in the lineup everyday.

What annoys me more than anything is that nobody mentions that he stinks, because aww shucks what a nice guy he is, but the second he goes 1 for 5 with a solo homer, it’s on every highlight show in the country, nevermind that going 1 for 5 drops his average and on-base percentage.

Go and search for “Tim Tebow struggling” on Google or whatever you use to search the web. Not one mention that he’s in a horrendous slump or that he’s regressed back to the the mean.

He’s not a prospect. He never was. And at some point the Mets have to realize that the only thing he’s doing is taking the roster spot of a guy who actually might be a prospect and contribute to the big league team in a few years.

Yes, he’s bringing in all sorts of new fans this season, and that’s great for the teams in the leagues he’s played in, but at some point that ends as well. It’s akin to having a guy wrestle a bear at halftime of one game, wondering why the crowd was sold out that night, and then the next night trying to figure out why nobody is back for a regular game.

So hurry up Mets, call him up to the big league in September so he sells you a few more tickets and t-shirts, then end this circus so baseball can get back to normal.