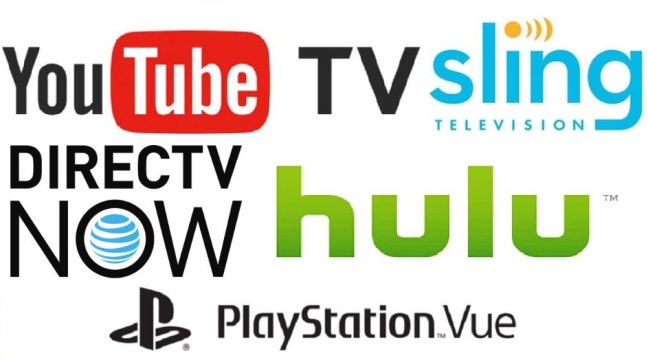 With college football season starting Saturday, it marks the team of year where people want to buy cable or satellite to make sure they don’t miss out on their team’s games. Or they just want to be able to watch as many college football games as possible.

Over the past couple years though, streaming TV options have increased to the point where there are four or five legit options for fans wanting to avoid dealing with the cable or satellite companies.

We’re here to give you the rundown on the five biggest ones, what they cost, and because we are worried about all sports here, the full listing of every sports channel that is available with each service, as well as a brief review of each service.

***PLEASE KEEP IN MIND THAT ALL OF THESE SERVICES REQUIRE INTERNET ACCESS!*** So it may be $40 for one package, but that’s $40 plus your monthly internet bill.

But before we get started, here are some FREE ways to watch sports.

Now, keep in mind that these are FREE, so you’re likely not getting much or anything of what you want.

Buy an antenna. This is a given, but it’s amazing how many people don’t realize you can get free channels like ABC, CBS, NBC, and FOX with just an antenna. And most of them have subchannels as well. Go to WalMart or wherever, and consider your option. Live outside the city where your local TV stations come from? Get one with a big range (it’ll say its range on the box). Live very close to or in the city? One with a range of say 20 miles on it should work great. Also, when you buy it, move it around your home a bunch. These are really finnicky and moving it a foot can mean the difference between all the channels available and none, so have a bit of patience too.

Check things like PlutoTV. PlutoTV is a free streaming “cable” option that has a handful of channels you might recognize, and is mainly just channels of shows like Mystery Science Theater 3000. But it does have a sports section! They will even have around three college football games each week for smaller conference like Conference USA with the addition of the Sinclair-owned Stadium channel.

YouTube, ESPN3 and team websites often offer streaming. If you went to a big school who isn’t good or popular, you’re probably on ESPN3, which is usually included free with your internet service, and there are tons of games on there in every sport. But if you went to a Division II school or NAIA, most schools now will stream their games free either on the school website, or YouTube, so if you really want to watch Montana Tech for instance, you probably can.

There are of course tons of sites out there that illegally stream games, and you can go ahead and use those, but know that it comes at the risk of infecting your phone/computer with viruses due to there being 4,000 pop-up ads on these sites, for even shadier products/sites.

Now, on to our streaming options:

Base Price: $35/month
Cost for every sports channel: $60/month

Included in the base $35 package are ESPN, ESPN2, FoxSports1, NBCSN, which isn’t much, and honestly, you’ll need to go up to the $60 package because the middle one at $50 adds ESPNNEWS, ESPNU, MLB Network, SEC Network, and Tennis Channel.

This is the service I use (I got in when the $60 package was offered at an early-bird price for $35/month), and I really like it. It operates pretty much like the actual DirecTV satellite packages do. It runs really well on your phone and casts to a Chromecast really easily.

In my experience I’ve also found that it also isn’t as far behind cable/satellite, maybe 30 seconds or so, which is pretty good considering most of these other options are around two minutes behind the cable feed.

The only thing right now is it is limited on devices. Really, it works on your phone, and they just added Roku, but it’s not on PS4 or Xbox One, and isn’t on a whole bunch of other devices.

It’s also worth nothing that if you have AT&T cell phone service, you can get a discount on DirecTV Now, so that may be worth considering if you want to bundle everything together in one spot.

Base Price: $20/month
Cost for every sports channel $50/month

Yes, $20 is a very enticing price point to get in the door, but as far as sports that will only get you ESPN, ESPN2, ESPN3. That’s it. You’ll likely need to spend $40 to get those three, plus regional Fox Sports, NFL Network, Regional NBC Sports, FoxSports1, FoxSports2, and NBCSN. Tack on the Sports Extra package up above and that’s how you get to $50/month.

I had Sling for a while and liked it prior to the switch to DirecTV Now, it runs well, the interface is easy to use, and truthfully, at its all-in price of $50 for every sports channel, it’s the best combo of the most sports channels at the cheapest price. There are ways to knock that down too. If you have a friend with cable, you can use their login to access every ESPN event, meaning you only need to get the $25 Blue Package (which has no ESPN channels) and the Sports Extra for a total of $35. This is what I did before switching over, and it worked well for me.

Now, it does lag behind the cable/satellite feed by around a minute or so, and the app ran TERRIBLY on my Xbox One when I had it, so that is worth considering.

If you’re someone who wants to mix and match and piece together other streaming options, as I mentioned with the ESPN trick, Sling might be your best option.

The $40 intro package at PSVue includes ESPN, ESPN2, FoxSports1, FoxSports2, NBCSN, so if you want just national channels and don’t care about the regional sports channels, or niche options like Golf, NHL, etc., this is your option.

For $5 more you can add Big Ten, ESPNU, ESPNNEWS, Regional Fox, Golf, MLB, NBA, NFL, Olympics and SEC. Really, at $45 that’s almost every channel minus Fox College Sports, and what you see in the Sports Pack above, which is REALLY niche. If you want the most bang for your buck, at $45/month for all of those is the best you’re going to do among our options today.

I personally haven’t used PSVue, but know a few people who have and they seem to have really enjoyed it. Also, you don’t need a PlayStation 4 to run it, it works on pretty much any device (except of course Xbox).

Base Price: $40/month
Cost for every sports channel: $40/month

Basically like PlayStation Vue in terms of price and channels, but there are no add-ons, and no other tiers to get the channels that aren’t available. What you see is what you get. Now, $40 is a fair price for what you see up above, and should be PLENTY for the casual sports fan who wants all of the big national games, but if you’re a niche network fan of any of four major leagues, this is not the service for you.

I haven’t tested this one yet, but the original Hulu streaming service always worked well, and so I have to assume this will as well.

Base Price: $35/month
Cost for every sports channel: $50/month

This service isn’t available in every market yet, but it’s almost the exact same offering as Hulu, only $5 a month less, and with 1 or 2 different sports channels available. YouTube has always ran well, so if this is available in your area, or will be coming soon, this might be worth considering, because it offers a bunch of good national channels, as well as your regional sports ones, at a slightly lower price.

Most of these will also offer you a free week’s trial, if you put in your credit card information, so if you want, you can test drive these options out and see which one works best for you, while also taking into account price.

Again, for all of these you will need internet access, so you’re still looking at around $100 month for internet and streaming TV access, but that’s still $20-$60 less per month than when I was paying for cable with all pretty much all of these sports channels available.