I may not have spent $100 on it (thanks to one of the numerous shady sites out there), but I caved and tuned in to watch the much-hyped Conor McGregor and Floyd Mayweather fight.

First off, let me say that McGregor did much better than I thought he would. He certainly didn’t embarrass himself, and I think for the most part his effort helped the people who did pay for the fight get their money’s worth.

But let’s be real, McGregor was never going to win, like all the MMA stans would have you thinking in their incoherent rants on Facebook and Twitter. He got pummeled, much like Floyd would have had it been a UFC fight, and it only would have gotten worse if the ref hadn’t finally ended it.

Yes, he (at least in my opinion) won the first three rounds of the fight, but that wasn’t because he put on some masterful boxing display or had Mayweather confused by anything he was doing. It was because Mayweather, like he does in every fight, takes the first two or three rounds to play defense and scout an opponent to see where he can take advantage of them over the final 8-10 rounds, early scorecards be damned. And he did exactly that after the third.

After the third round I had Mayweather winning each of the next six rounds (two judges had it 8-1 for Mayweather, which I think is insane), putting him up 6-3. And he was well on his way to winning the 10th before it was stopped, and likely would have scored at least one knockdown had the ref not stepped in and done the humane thing of not letting McGregor continue to have his head caved in.

Even if you squinted really hard, AT BEST McGregor was likely down 5-4 heading to the 10th. Had it not been stopped and he somehow makes the bell at the end of the round, he’s down at best 6-4, needing to convincingly win the last two rounds or score at KO to win. It wasn’t happening.

McGregor wasn’t beating Mayweather on points, and he sure as hell wasn’t beating him with a knockout. Mayweather may have punted the first three rounds, but here’s what he figured out: McGregor had ZERO power while wearing boxing gloves. None. All those times that McGregor “tagged” Mayweather in the early rounds? That did nothing but let Mayweather know that he could walk right into his punches and be OK. And once he figured that out and started throwing punches in Round 4, the fight had turned.

The only reason it seemed like McGregor was doing significant damage was because the announcer, who works full-time with WWE and therefore knows how to sell entertainment, would scream and yell like it was a miracle that Mayweather was still standing, when in reality, he didn’t flinch, or he got hit by a harmless jab. In fact, the most McGregor hurt him all night was on a low blow.

After Mayweather started to take over starting in the fourth, here was how I looked at it after they completed six rounds: In my head the score was even, with each fighter winning three rounds. But a good way to tell who is probably going to win the later rounds and the fight is to look at the fighter’s faces. Despite McGregor landing way more punches through six, he was somehow the one whose eyes were swollen and red. Mayweather looked like he did when the two stepped into the ring, and wasn’t even breathing hard.

And when McGregor got off the stool for the seventh with his mouth open, sucking wind, it was only a matter of time. The seventh round was also when Mayweather started to piece together combinations, and went into, “Fuck it, it’s time to KO him” mode. I audibly said to my girlfriend during that round, “This is about to get ugly.”

What started in the seventh only got worse with each passing round. McGregor showed one flash of life in the eighth where he landed a couple good counters to Mayweather’s increasingly aggressive offense, but as we noted early, there was no power behind them when he was fresh, so there damn sure wasn’t anything behind them while he was gasping for air in the late rounds.

Oh, and look here, here’s a chart showing EXACTLY WHAT I’VE SAID. McGregor won the first three rounds because Mayweather did nothing, then got waxed over the rest of the fight. 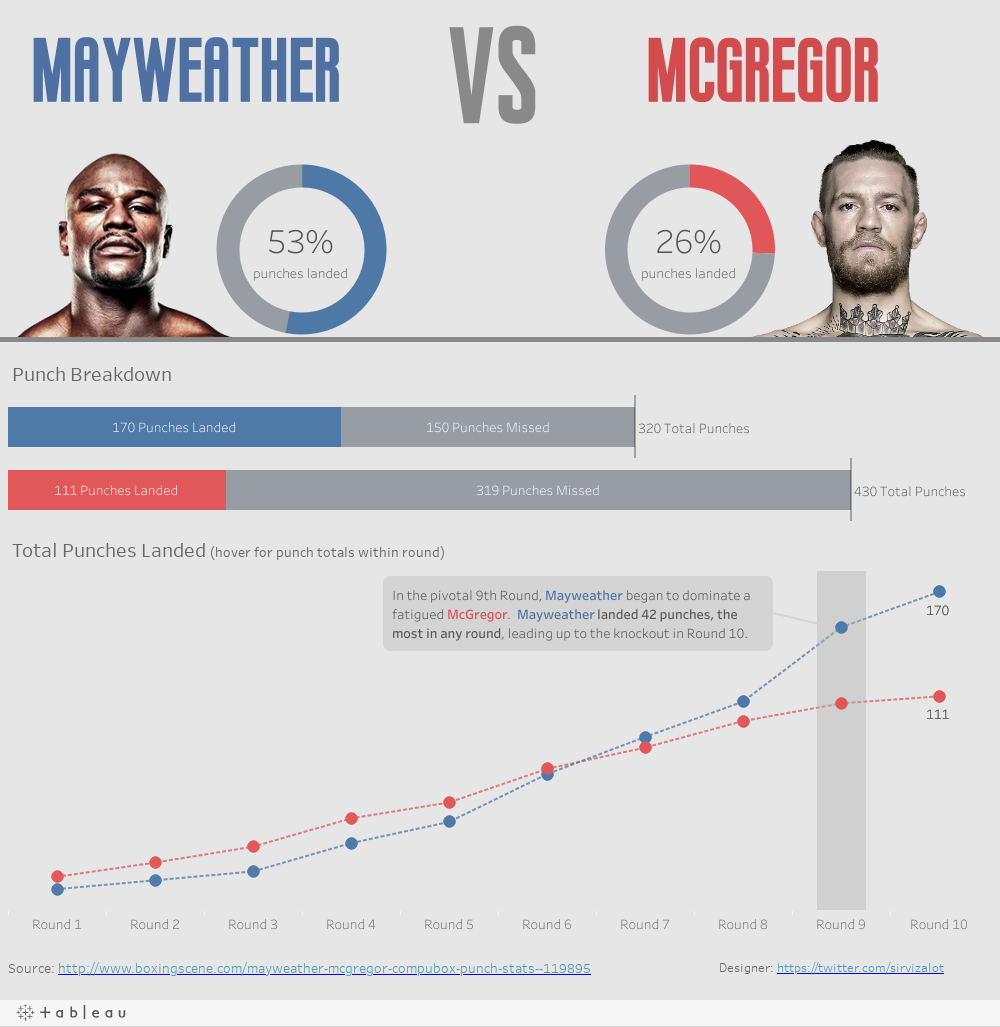 The last half of the ninth round McGregor couldn’t even lift his hands over his shoulders to defend himself, which seems bad when he already didn’t move his head all night, allowing Mayweather to basically just throw haymakers because he knew a counter-punch wasn’t coming.

Repeat this until the ref finally stepped in during the 10th and there’s your fight. Really, it was impressive McGregor didn’t go down during that barrage, but lucky for him the ropes and holding onto Mayweather were able to save him at least twice.

Again, this is not to say that McGregor embarrassed himself, I told you right at the start he impressed me more than I expected him to, and put on a fight that was more entertaining than I expected him to. He probably doesn’t have a future in boxing, but he made at least $30 million, more than he’d made in his entire MMA career to that point.

But putting on a decent show and not embarassing himself doesn’t mean he was winning, or even close to it, so stop saying he had a chance.