As a result of buying some hockey sticks recently, the website I purchased them from gave me a free one-year subscription to The Hockey News, which is a nice little throw-in for spending more money than you should on hockey stuff.

Well the first issue of my subscription showed up Friday afternoon, and it was a ranking of the Top 50 players in each franchise’s history. Some were pretty well done (Bruins), and some were hilarious and sad, because the team has been around for maybe 17 years, and there just haven’t been that many good players to come through (Columbus).

Now, keep in mind that the good folks at THN attempted to rank these players based on more than just points. So if they were a good two-way player, that comes into play, if they won Stanley Cups, or were great at things off the ice, etc. Needless to say, it wasn’t scientific or using any sort of advanced metrics.

But as things always go with these kinds of rankings, there are some players who receive way too much credit for what they’ve done and are way over-rated. Here are some that actually made me stop and wonder how they put a player so high. For the sake of simplicity, we only took players who were rated among the Top-10 for their teams.

Cam Ward could play a game of pick-up hockey in his driveway with nothing but family members and he wouldn’t be the fourth-best player ever among them. Yes, he won a Stanley Cup and Conn Smyth by getting hot at the exact right time, but from 2006 to now, he’s had two seasons where he was good, two where he was average at best, and seven where he was terrible.

I get the Whalers/Hurricanes franchise hasn’t had a ton of success, and therefore not a ton of players who have had long stretches of success for the team, but there is no way Cam Ward is the fourth-best player in any franchise’s history. 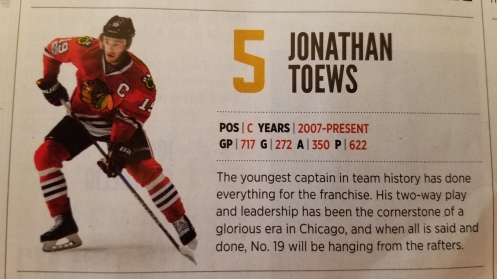 Now, before you scream at me and tell me how great he is, yes, he is one of the great modern Blackhawks and has three Stanley Cups. But he’s an above-average NHL player who has had great teams around him and gets the benefit of the doubt because “leadership” or something. He’s not even the best player of his generation, behind at least Patrick Kane and Duncan Keith, both of whom have won major awards and also have three Cups. Is he really better than those two, or Tony Esposito, or Denis Savard, or Chris Chelios? He should be in the 10-15 range in my opinion, but I know THN didn’t want 9,000 dirty emails from Blackhawks fans.

You could take what I said about Toews above and put it almost word-for-word in this spot for Doughty. Yes, he’s a good player on a good team and gets a ton of credit for a system that was designed to prevent other teams from scoring. He has a Norris, but many will argue he didn’t deserve that. How in the world is he ahead of Luc Robitaille and Rob Blake? Heck, he’s not even the best player of his own team’s generation and is probably third behind Anze Kopitar and Jonathan Quick (who is also overrated at 8th). Another case of recency bias.

Honestly, Messier might be the most famous player in Rangers history, but in no way is he the third greatest player in the history of the franchise. The guarantee, winning a Cup, yes it’s all well and good, but there are at least four players off the top of my head that I would say were, or are better Rangers than Messier: Andy Bathgate, Rod Gilbert, Henrik Lundqvist and Jean Ratelle. I’m not saying he’s not a Top-10 player, but ranking him third because he won a Stanley Cup is a stretch.