Last night while playing the Rory McIlroy golf game on XBox one, friend of the site @chiweethedog alerted me and the rest of HOTSPROTSTAKES to the 1989 Putt-Putt Golf Skins Game and oh my gosh, if this isn’t one of the best things I’ve ever seen on the internet, I don’t know what is.

Golf action? Late drama? 1980s hair and clothes? This video has it all. Let’s go to the action!

Oh man this title graphic, and it’s in Augusta, Georgia! The Putt-Putt Skins Championship Series, which means there is more than one of these each year.

Let it also be noted that this video somehow has 634,903 views. No wonder this country is in the toilet.

I wonder what poor schmucks they have “announcing” this…wait what, Billy Packer? Who did he piss off to get sent to Augusta, Georgia on a cloudy day to call putt-putt golf skins games? Can we get Jim Nantz to do this on Super Bowl Sunday since CBS doesn’t have the game?

Oh the Giraffe shot is clutch; you know it’s a nice course where there’s a giant giraffe obstacle/decoration on the course.

“The Lakes and mountains and waterfalls will certainly add to the beauty of the course.” Uhhh…you realize none of them are real right? Like, they’re miniature fake versions of what you might see at an actual golf course?

Could this David Lloyd guy be more southern? Is he the head pro at this course?

Also, holy shit they’re playing for $18,000 worth of skins in putt-putt golf, which in 2018 money is like $40,000. And I LOVE that they just have a grand pinned to a board behind the announcers in this opening shot. 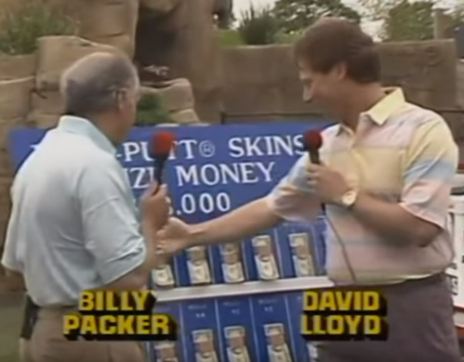 And now we get interviews with the putters, which I guess is what we call the actual guys, and not the clubs they’ll be using. Which begs the question, do these nerds bring their own putters or do they use the shitty ones most putt-putt courses give you?

They’re talking about the all-time greats of putt-putt golf and I have never heard of any of these guys.

Billy Packer notes that if you aren’t making aces in this stuff, you aren’t winning skins, so we should have lots of action on the course today.

Holy shit there is a gallery that is clapping as they head to the first tee. Why? Do these people not have jobs, or are they friends of these people. I have so so many questions.

Let’s take note of the outfits these putters are wearing at this point, because this is peak 80s/golf fashion. The guy is playing in boat shoes, so clearly he’s the local Georgia guy.

This first hole is a real dud, it’s just a straight hole with no obstacles, where the fun shit that we saw in the opening shot? OH AND THERE IS AN ACE! Danny Dore and he scores! OH CHRIS BARNES BANKS IT IN! No skins on the first hole, but if this is what we’re in store for, this is going to be amazing.

TRUE FACT: Chris Barnes is the same Chris Barnes that is on the Professional Bowling Association, where he will be inducted into the Hall of Fame this year. So if Chris Barnes challenges you to some other weird leisure time activity like horseshoes, darts, or ping pong, probably don’t play him for money.

I love that the gallery has to follow them along each hole. AND HOW ABOUT THOSE LADIES IN THE CROWD?! Which begs the question, are there putt sluts out there?

ANOETHER ACE! Something tells me we’ll be seeing so many of these it’ll be boring by the end. Yep. Barnes again with the bank and the skin rolls over again. Let’s go to Hole 3.

Now this is what I think of when I think of putt-putt golf, hills and bumps and weird things to bank it off of. If they ace this hole I’ll be amazed.

Hold up, that guy missed and had a good 4 feet left and they just gave it to him, are we really thinking that’s a gimme or are these guys just that sure that somebody is acing every hole? Holy shit he made that look easy for that ace. CHRIS BARNES AGAIN ON THE BANK. It’s like he does it on purpose and the skins rollover to $4,000 on the 4th hole. This is sickening. They’re playing putt-putt and about to make what I do in two months in like an hour.

Back to back aces, on to the next hole.

Say what you will, but these guys get up there and hit it, they don’t sit there worrying about every little thing like those PGA Tour divas do.

WHOA! AROUND THE RIM, JUST PAST AND IT ROLLS BACK IN! And Billy Packer notes that maybe the wind helped him. AND WE HAVE A SKIN WINNER! Jeff Estep takes $5,000 for winning that hole, what are you doing with your life?

We apparently skip Hole 6 because YAWN, more aces, and are on to the 7th, which is worth $2,000 after the rollover.

“Chris Barnes on the tee.” Uhhh they don’t use tees, so wouldn’t it just be the starting area?

WHOA that went hard to the right, shocking that golf would go to the right, AMIRITE?! So that’s $2,000 for and hey whoa we’re already on to the next hole without a leaderboard update. They must want these guys off the course ASAP so they can get back to charging people to play.

Chris Barnes bank another ace in. And he’s so boring about it. He’s like the Tim Duncan of putt-putt, just so boring but efficient.

Oh look another ace and that money rolls over to the 10th. Here’s a quick look at our leaderboard after the outward nine and oh jeeze if you took the money graphics off it looks like an “In Memory” thing you see at award shows because it’s just three heads smiling in the clouds. 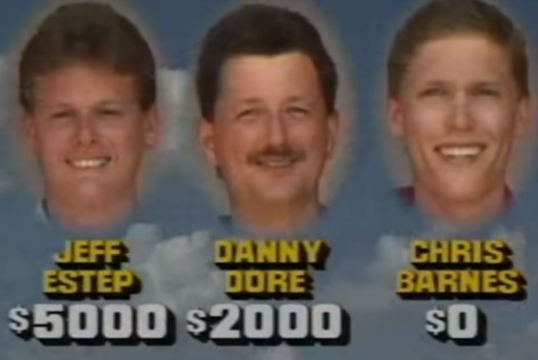 Another ace for Barnes on a bank. Sun rises in the east, etc. And another skin for Barnes. He’s within $1,000 of Jeff Estep.

Hey wait, they just skipped two holes and now we’re suddenly on the 14hth. Look here, whatever channel this was on, I paid for cable to see all 18 damn holes, and so far you’ve skipped three.

I have to admit, this course sucks. It’s all pretty straightforward holes with no obstacles. I get you want aces and can’t have guys hitting it down tubes and out of an elephant’s trunk, but come on. This is a mayo course.

“Normally players would be talking about laying up on this hole.” I’m sorry what? Laying up in putt-putt golf? How is that even remotely possible? I mean I guess technically if you don’t make it you’re laying up.

AND THEY SKIP ANOTHER HOLE. Come on, that’s four holes we’ve missed, nearly 25 percent of the round. You don’t show an NFL game and skip the 2nd quarter. This is bad TV coverage.

Barnes…misses on the bank? I don’t even…what do we do now?

WAIT. Is that a putt-putt mascot over that guy’s shoulder? Oh my God it is, and why hasn’t this thing been featured on TV the entire round. SO MANY MORE QUESTIONS. 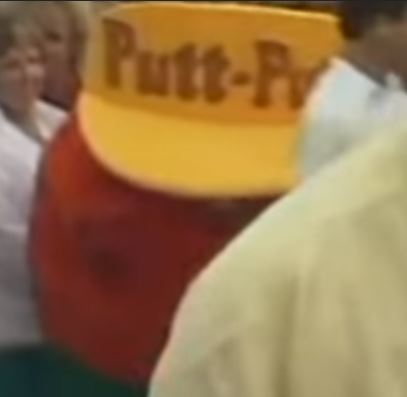 We get a face view of the mascot and oh my God I’m going to lock the doors to my apartment.

And nobody makes an ace on the 16th, I didn’t realize that was possible.

Barnes misses again. Never have heroes folks. Jeff Estep rattles it home and that’s $3,000 for him, he takes the lead with one hole left! Estep is up to $8,000, one skin ahead of Chris Barnes as we go to the 18th.

And Barnes wasn’t even close on that one. Gotta wonder if the pressure got to him late in the round. Estep is wide left, must have went to Florida State, and based on his outfit color that seems possible. No aces on the 18th, so we have SUDDEN DEATH for the last skin! So we either have a Estep as a winner, or Barnes could tie him. This is peak golf excitement.

Another miss from Barnes but if I had that putt-putt mascot there beside me while I was putting I’d probably miss too. 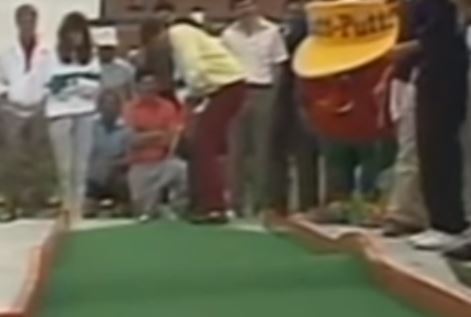 And of course Danny Dore, the guy who is way out of the running for the title, makes it and takes the last skin. Womp womp.

THEY JUST HAND THEM STACKS OF CASH! Amazing. “Hey great putting, here’s a wad of hundreds, don’t get mugged in the parking lot on the way out.”

Boy is the trophy the winner gets sad. It’s like a section of log with a black plaque on it.

Thank you for reading HOTSPROTSTAKES.com, where we find shit like this and spend an hour watching it and taking notes.