Taco Bell is most known for its wild creations that bring people in mostly out of curiosity, mainly so they have a story to tell about what they just ate, and to be able to post pictures on Snapchat, Instagram or wherever else.

So by their lofty and wild standards, the Taco Bell Nacho Fries are a pretty tame addition to the standard menu. They’re fries! But with nacho cheese to dip them in! 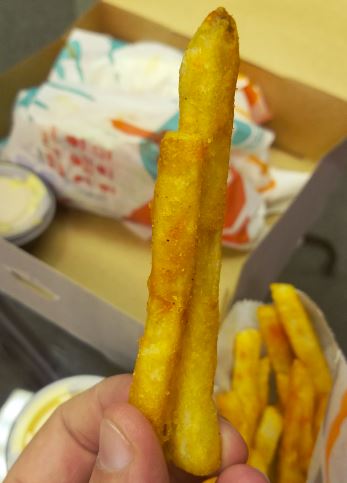 The fries are available with a $5 box meal. which includes the fries, nacho cheese sauce for dipping, a Doritos Locos Nacho Cheese Taco, Cheesy Gordita Crunch, and a medium drink of your choice.

The size of the fries portion you get in the box appears to be a little underwhelming at first, because it’s a small size, and because the fries are a little thicker than most other fast food fries, you don’t get that many of them, but this actually works out in the long run, as I’ll explain later.

The fries look good when examined, and appeared to be cooked all the way through, making them crispy on the outside, but still some potato chew past the deep fried part.

My first bite and reaction was, “Well, these taste just like seasoned fries.” And that’s not a bad thing. Seasoned fries are good, these are as well. They’re just not as good as say, Arby’s seasoned fries. The seasoning on them is good, it’s not overpowering, but it isn’t anything amazing that leaves you wondering what they put on them and craving an endless portion of them.

Now I’m a little torn on the inclusion of the nacho cheese sauce, the same cheese that comes with the 99-cent nachos you can order as a side. The cheese is good, and cheese on fries is good, but when you get a good scoop and load up on the cheese, I feel like it drowns out all of the seasoning flavor on the fries, and you just end up eating a cheesy bite of potato. Again, none of this is bad depending on what you want from your fries, but it’s nothing amazing, and I’m sure there are plenty of folks out there who would rather have just seasoned fries without the cheese, and vice versa.

Now back to that portion size, again, it’s not big. That picture you see at the top was my full order that came with the $5 box. And while that’s not a lot, it’s the perfect portion for the meal you get in that box. There’s enough fries in that sleeve that you feel like you get a good idea of the fries and can enjoy them, but it’s not so big to the point where you just feel like you’re filling on fries, continuing to eat them because you don’t want them all to go to waste.

So to sum up, if you like seasoned fries, or if you like cheese on your fries, you will enjoy these. They’re good, not great. Nothing amazing, but I’ve definitely had worse.