Got a weird one here. I’ve been really into military history lately so here are my picks for the top 10 generals of World War II.

10. Dwight Eisenhower – United States: The architect of the D-Day invasion. Rode that fame all the way to the White House.

9. Heinz Guterian – German Reich: Inventor of the Blitzkrieg strategy. Conquered Poland in under a week for the Nazis.

8. Isoroku Yamamoto – Empire of Japan: Did Pearl Harbor. Which was obviously a very bad thing to do but pretty smart from purely a military perspective.

7. Bernard Montgomery – Great Britain: Monty was the most well known British general. He led the UK’s counter attack and played an instrumental role in the liberation of France.

6. Douglas MacArthur – United States: The US general that won the Battle of Midway and halted Japan’s assault on the islands of the Pacific.

5. Konstantin Rokossovsky – Soviet Union: Defended Stalingrad in one of the biggest upsets of the war. Sidebar: Have you seen the movie Enemy At The Gates? That movie is sweet.

4. George Patton – United States: Led the Allied forces to victory at the Battle of The Bulge and liberated fascist Italy.

3. Gregory Zhukov – Soviet Union: Defended Moscow from Nazi invasion and brought the fight right back to the Reich by winning the Battle of Berlin, ending the war in Europe. 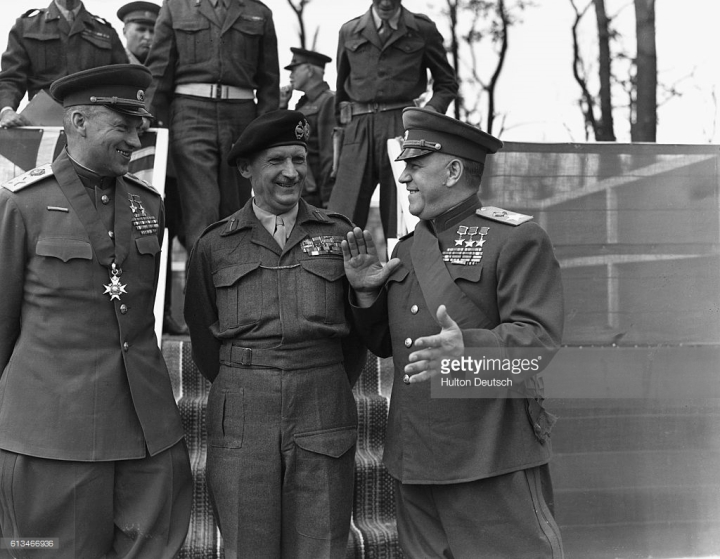 From left: Rokossovsky, Montgomery and Zhukov celebrating victory in Berlin.

2. Erwin Rommel – German Reich: Ah yes, the Desert Fox. Rommel conquered North Africa for Germany and was also instrumental in other Nazi offenses, leading their fearsome Panzer tank division. By all accounts, Rommel was actually a good guy too. Units under his control were never once accused of war crimes and he even plotted to assassinate Hitler, resulting in his own death.

1. Erich von Manstein – German Reich: Brilliantly conquered France in just six weeks with his plan to cut through the Belgian woods. He was also correct regarding the soon-to-come German shortcomings of the war, opposing Operation Barbarossa in Russia and being against an aerial-only campaign in the Battle of Britain.