With the Olympics going on, it’s odd to think that this is the only time in sports where somebody is remembered for finishing third, or, being the second loser in a season or event.

And prior to today I had no idea that there used to be a 3rd-place game in the NFL called The Playoff Bowl, or the Bert Bell Benefit Bowl, with the proceeds from the game going to the players’ pension fund, and played the week after the then-NFL Championship game or Super Bowl. The game was played in Miami at the Orange Bowl every year it existed.

It joins other notable 3rd-place games that have long since been forgotten, including the NCAA Basketball Tournament 3rd-place game, which lasted from 1946 to 1981.

The game was created basically as an excuse to have more NFL games on TV during a time when there wasn’t much football on TV, because at the time the only NFL postseason game they showed was the Championship game. (Take me back to these days, I don’t need NFL coverage every day of the week.) 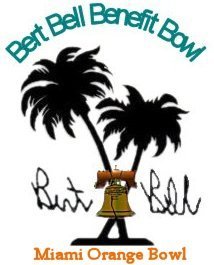 The game was played 10 times from 1960 through 1969 (nice), and saw three teams, the Detroit Lions, Dallas Cowboys, and Cleveland Browns each play in the game three times.

Amazingly, and people probably still won’t believe this, the Detroit Lions hold the best record in the history of the Playoff Bowl, going 3-0 in their trips to the game, and actually winning the first three games in ’60, ’61, and ’62. There was a time where they Lions were good and almost won a championship! How the team doesn’t have three NFL Playoff Bowl banners hanging in Ford Field, I’ll never know.

In a strange move of the NFL basically ignoring anything that isn’t the Super Bowl or that happened before the Super Bowl started, while the games were played in the 60s, it was considered an official game and a win, but they are now considered exhibition games and don’t count towards a players stats or possible playoff record.

The Baltimore Colts and LA Rams are the only other teams two win multiple Playoff Bowls, with the Colts going back-to-back in ’65 and ’66, while the Rams won in ’67 and the final Playoff Bowl in ’69 (nice).

In the most Cleveland Browns stat ever, the Browns were winless in their three trips to the game, falling in ’60, ’63, and ’67. The Philadelphia Eagles are the only other team to make multiple trips to the game and not win, dropping games in ’61 and ’66.

Weirdly, the most decorated player in the history of the Playoff Bowl is defensive tackle Roger Brown, who played in the game a whopping five times, winning every time he played, three with the Lions and two with the Rams.

The game came to an end in 1970 partly due to the fact that the AFL and NFL had merged, and the league was able to put on more playoff games that had meaning, thus making the game irrelevant.

One other weird fact about the game: For the last six years the game had rotating announcers, with one guy calling the first half, then a completely different play-by-play guy on the call in the second half.

Needless to say, there would be no reason to have a 3rd-place game in the NFL in this modern era, because like the game at the time, nobody would go or watch it on TV.