A mere day after the penultimate financial collapse of the Cornwall Nationals, the Federal Hockey League has brought back their filler solution to finish out the season.

Well under the radar throughout the course of the day – and discovered by Papa Rovitz around noon – now in the Teams section on the FHL website are the Northern Federals. This is the second time in Federal League history that a league-operated franchise has been in operation (Delaware Federals, 2011).

The Federals have only five games scheduled for their nearly two month existence…all road games against the Watertown Wolves, to finish out the Wolves home scheduled games (2/23, 3/23 & 3/24, 4/6 & 4/7). All the Nationals home games are forfeited-wins for the other five FHL teams.

The interesting part of it all is the roster. While obviously made up of former Cornwall Nationals, the true talent of that team has been eaten up in a dispersal draft (ten players), namely Nationals’ star Ahmed Mahfouz (now with the Danville Dashers). The most-seasoned players on the Northern Federals are defensemen Davide Asselin, a -2 on the season – who ironically has bounced around junior league teams the last few years – and forward Adamo Asselin. Misery loves company, especially for the Asselin brothers. Both played two whole games this season with Cornwall.

They have a full starting line up, and two bench guys. That’s right folks, a whopping eight players. Obviously, they’ll sign on a few free agents, but with 15 periods of hockey to play all season…we’ll see.

In trying to unveil where the team will practice out of in preparation for their five game sleight, I looked up the league footprint – showing where the league has its teams – and was greeted to an incredibly FHL sight.

Some jokes truly do write themselves.

No information has been released online about the team outside of its roster, schedule, and last place spot in the rankings. 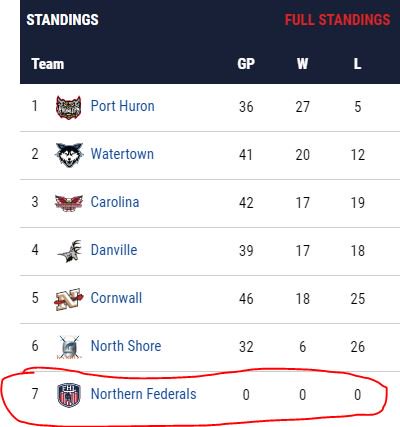 We can only hope that the Federals will force marvelous chaos and win all five against the Watertown Wolves, enroute to their first ever playoff berth. Assuming North Shore wins zero games between now and the end of the season (or folds as well), the Federals would finish one game behind them.

Sign me up, I’m all in on the Northern Federals.