Folks, it has been a while since we had ourselves a good-ole fashioned minor league indoor football shit-show, but this one had been brewing a while, and finally came to a head today!

The Dallas Marshals of Champions Indoor Football lasted just over two seasons, playing in two different towns and arenas before finally calling it quits on Facebook today. Here is the press release announcing that the team has “suspended” the 2018 season, yet the rest of the release is basically them saying goodbye. There will be no refunds. 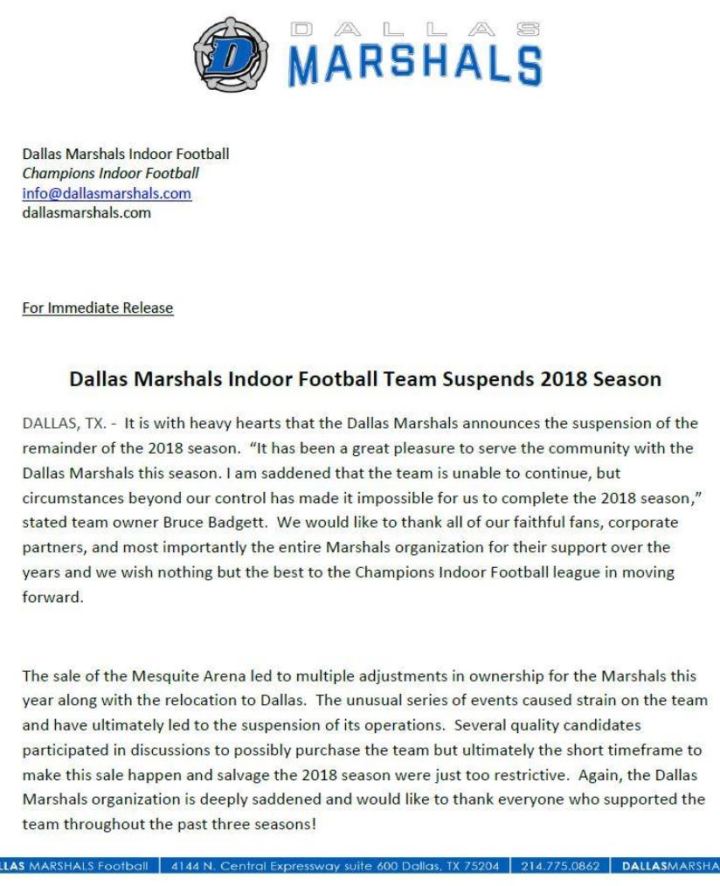 Let’s try and start from the top on what led to this.

The team started in 2016 as the Mesquite Marshals, going 2-10 in their first year before rebranding as the Dallas Marshals in 2017, where they rallied to go 7-5 in their second season, with three of those wins coming against a team who didn’t win a game all season.

After the 2017 season is when the problems started for the team. Their founder and man who made things run pretty smoothly in Mesquite left to go start the, so far, VERY successful Quad City Steamwheelers, also of CIF. Then their home in Mesquite was sold to new owners and basically the Marshals were told, “See ya later!” and they scrambled to find a home for this season.

The settled on Fair Park Coliseum near downtown Dallas, but from there, things didn’t get better. Their exhibition game was cancelled due to them not being able to secure insurance on the arena, which, whatever, that’s not a big deal because the game didn’t count.

But those issues boiled over into the regular season with at least two home dates being “postponed” and the league saying they would issue a statement. When announcements like that are made, the writing is sort of on the wall. Even the home games they did play were a disaster. Pictures from the game showed crowds that couldn’t have topped 300 people, and they were rumored to be paying to only open one side of the arena’s seats, to save on staffing and concession expenses.

And then suddenly all their home dates on the schedule and Fair Park event listings disappeared.

They tried to play out the season as a travel-only team, so the other teams in CIF that aren’t folding could play out their home schedule, but that only lasted one game, with their final game being a 43-3 defeat at the hands of the previously winless Texas Revolution.

The Marshals ended 2018 with a 1-5 mark, and an overall record of 10-20 over their two-plus seasons. I saw them play in-person twice on their trips here to Amarillo, and yeah, they were pretty much as bad as advertised.

Now, the bigger issue is what this means for CIF going forward, not just this season but for 2019 and beyond.

The issue for this season is that it drops the league to 10 teams, and leaves a couple teams, Amarillo and Quad City, with one fewer home game for the season, and other teams with questions about what it means for their record due to games that were supposed to be in Dallas now being officially cancelled.

It also creates divisional chaos, because the league was playing with 11 teams, so divisions were already imbalance with the North having six teams, and the South five.

This obviously drops the South to just four teams which is a problem when the Top-4 from each division make the playoffs, so there is potentially no playoff race in the South.

The rumor is that the league is looking to move the North’s first-place team (Salina, currently 4-2), to the South for standings purposes, and to even out each division at five teams.

The other issue is for 2019, where the league has already announced the re-addition of the West Michigan Ironmen (who tried to bolt to the IFL, were turned down in court, and came crawling back to CIF), which puts them at 11 teams before any other potential expansion teams are added for next season. If a 12th team (or more) isn’t added, then you have to believe they’d roll into 2019 with the rumor division alignment of Amarillo, Duke City, Wichita, Texas and Salina in the South. With Kansas City, Omaha, Quad City, Sioux City, Bismarck, and West Michigan in the North.

But because this is minor league indoor football, we all know that won’t be the case and some wild shit will happen between then and now.

So  yeah, that’s a lot to take in and process, but the bottom line is that the Dallas Marshals are done-zo, in a move that shouldn’t come as a surprise to anyone who followed their saga with even a little bit of interest.