Folks, if there’s one thing we love here at HST, it is obscure leagues seemingly popping up out of nowhere, and yesterday we were alerted to the HOTTEST news in roller hockey: That the Detroit-based National Roller Hockey League is set to hit the…concrete? Sport court? Whatever, in 2019!

The Detroit Free Press broke the story on May 4, and included some of the details about what we can expect when this new league makes like Ludacris and rolls out.

The NRHL provides fast paced and fan-friendly professional roller hockey at affordable prices. Maintain the integrity of the sport of roller hockey, while providing a professional league for the best players in the world to showcase their talent. Uphold integrity and an ethical business model to induce the growth of the roller hockey.

The National Roller Hockey League’s vision is to rival the greatest leagues in the world. To have franchises from coast to coast and revolutionize the fast-paced amazing sport of roller hockey.

IT’S TIME! Roller hockey has grown tremendously over the past two decades, without a professional league for players to aspire to play in. The NRHL is the destination – the greatest players, fans, and sport in the world!

For those who don’t know, roller hockey is played 4-on-4, but there’s a lot of questions I have about this league, mainly in where they will play. The league announced last week the first team, the Detroit Dragons, who will actually play in Fraser, which will also also host the league’s first game and potential All-Star Game.

Check out this logo for the Dragons! 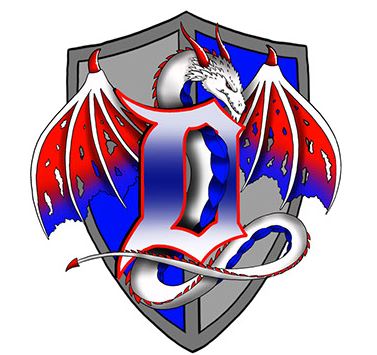 Looking at the league’s website, it appears they already played two trial seasons that don’t have any standings of any sort, but do have stats for the league leaders in things like goals, assists, points, wins, GAA, and Save %.

Now, back to the important things like where they might play, the Free Press article linked to above mentions there have had interesting with other towns in Michigan, including Muskegon, home to a USHL team, and then mentioned that St. Louis, Philadelphia, Southern California, and New York City are all places with strong roller hockey interest.

But does that mean they’ll play there? In my opinion, they would be wise to start regional and try to go from there, because the last thing a new league might need is a team in NYC, another in Southern California, and trying to figure out how to play games against these teams, especially if there are only going to be 5 to 8 teams in the first year.

Surprisingly, there is a rather decent history of pro roller hockey in the United States, currently there is the Professional Inline Hockey Association, which features 15 teams in two divisions, and sees some venues hosting multiple teams, incluiding five teams sharing a rink in Colorado.

There’s also Major League Roller Hockey, which operates a number of leagues in the United States and Europe, and is the only full-contact roller hockey league currently operating.

Some past leagues that tried to give pro roller hockey a go including Roller Hockey International, which lasted from 1993 to 1999, playing five seasons (there was no 1998 season), and being a victim of rapid expansion. The inaugural season saw 12 teams, and the next year it doubled to 24, before playing with just eight in the final 1999 season. This was the league that had the highest caliber of play, with lots of guys from the UHL, ECHL and other minor leagues playing during the summer to prep for the ice season. The league also had 28 players who either made the NHL or had previously played in the NHL, including goalies Daniel Berthiaume and Manny Legace.

There was also Pro Beach Hockey, a 6-team league in Southern California that played all its games at one site, and featured six teams. The games were all on ESPN2 and it lasted all of three seasons.

So yeah, that’s what we know and what we’ve seen previously in pro roller hockey, so get excited summer hockey fans, there’s a new league rolling to town next summer!